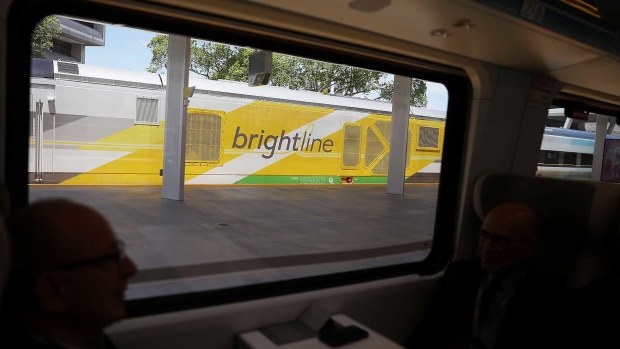 A Brightline passenger train stops at the Fort Lauderdale station during its inaugural trip from Miami to West Palm Beach on May 11, 2018 in Fort Lauderdale, Florida. , Photographer: Joe Raedle/Getty Images

(Bloomberg) -- Brightline Holdings, the train company backed by Fortress Investment Group, on Friday won the authority to sell $1 billion of tax-exempt private activity bonds to finance an extension of its Florida line that would quadruple its current operating length.

The decision by the board of the Florida Development Finance Corp., the municipal agency that gives private entities access to low-cost financing, clears the way for the company to first issue short-term escrowed debt this month, which won’t be based on the project’s risks. The company will then remarket the securities after going back to the board for final approval. That offering will test investors’ faith in the passenger railroad, which will extend operations to Tampa from Miami for a total of 320 miles (515 kilometers).

The country’s first new privately financed intercity passenger rail in a century, launched in 2018 along Florida’s east coast, missed passenger and revenue forecasts even before the onset of the Covid-19 outbreak. Service resumed last month between Miami and West Palm Beach after stopping in March 2020 for the pandemic. Construction continued on an expansion to Orlando, which is expected to wrap up at the end of next year.

About 70% of Florida’s population will have access to the line once it ends in Tampa, Brightline Chief Executive Officer Michael Reininger told the board Friday. “It will become the most powerful alternative transportation system in the country,” he said.

Most of the proceeds of the new debt will go to building capacity for the line to Orlando, with about $20 million going toward design and engineering for Tampa, Brightline Chief Financial Officer Jeff Swiatek told the board.

Brightline has previously used this financing tactic of issuing escrowed bonds and then converting the debt to fixed-rate bonds. But in what would be a first for the company, a significant portion of the remarketed securities -- $650 million -- could receive investment-grade ratings because the debt would be backed by a combination of upfront and annual payments Miami-Dade and Broward counties will make to Brightline in exchange for using the line for their commuter services, according to a report by PFM Financial Advisors LLC.

The smaller amount of the remarketed securities will be unlikely to earn investment-grade ratings because other cash sources such as operating revenue will back the debt, which will be subordinate, the report said.

The securities with an investment-grade rating would draw a wider range of buyers than the unrated debt can attract.

“Given the solid revenue stream, it’s a reasonable expectation that the bonds would be attractive to a large number of tax-exempt buyers,” Ryan Rosberg, senior research analyst at Nuveen Asset Management, said before the meeting.

Because of concerns raised by board member and Florida’s bond finance director Ben Watkins, the board adjusted its resolution on the debt issuance by requiring Brightline to return for approval of the remarketing. Watkins said that while he supported the project, aspects of the permanent financing remain unclear. “I just can’t get comfortable signing off on something when I don’t know what it looks like,” he said.

Brightline had already sold $2.7 billion of unrated tax-free debt for the $6 billion project. Some of the bonds have recently traded up in price amid positive developments for the project such as its re-launch. A bond due in 2049 traded Nov. 19 at an average yield of 5.3%, compared with a high of 7.75% in January, according to data compiled by Bloomberg.