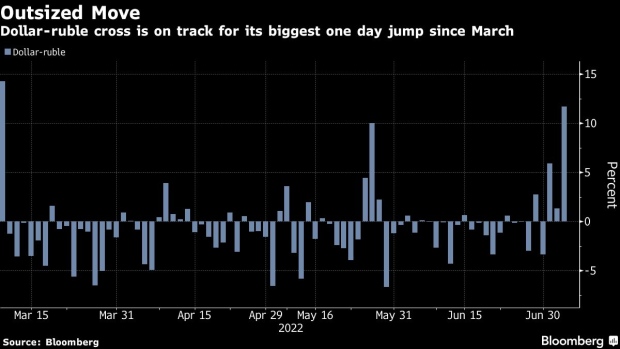 (Bloomberg) -- Investors’ rush into the safety of the US dollar was so strong on Tuesday that it even felled the indefatigable ruble.

The Russian currency plummeted the most in four months, pulling back from a rally that’s confounded traders and politicians alike since the early days of Russia’s war on Ukraine. The currency dropped as much as 11% to 62.30 per dollar amid broad strength in the greenback that also saw the euro plunge to a two-decade low.

If the ruble’s three-day slump continues, it could ease the pressure on the Central Bank of Russia to cut interest rates and relax capital controls to keep the currency trading within the range policymakers want. The ruble’s trend-following is a turnaround from weeks of strength which had defied global risk-off shifts and a downturn in the emerging-market asset class.

“The Russian authorities have been gradually removing various measures introduced shortly after the war in Ukraine started to support the ruble,”  said Piotr Matys, an analyst at InTouch Capital Markets Ltd. “It should not be, therefore, a major surprise that the ruble has started showing more sensitivity to external driving factors currently dominated by concerns about a global recession.”

The war and Western sanctions initially sparked a slump in the ruble to a record low of 121.5275 on March 10, but an unexpected turnaround followed, sending the currency surging 143% between early March and late June. Russia’s capital controls and forced conversion of export revenues created a one-way market, while the sanctions led to a collapse in Russia’s import demand, fueling the rally.

The gains continued despite interest-rate cuts of 1,050 basis points by the central bank and relaxation of capital controls. Policymakers also abandoned the forced-conversion rule. This cut into revenue realizations from energy exports and undermined Russia’s export competitiveness.

The currency advanced to a seven-year high and flirted with the psychological 50-per-dollar mark, sparking a debate among Russian officials on how to stem its surge.

“Russian officials will not mind at all a weaker ruble given that on a regular basis they’ve been expressing concerns that their currency is excessively strong,” Matys said.