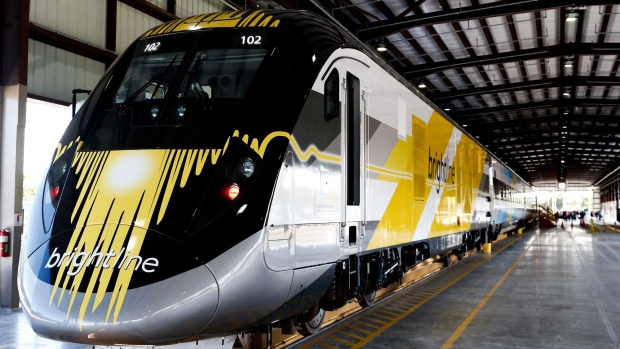 The All Aboard Florida Brightline express inter-city train is displayed during a media tour in West Palm Beach, Florida, U.S., on Wednesday, Jan. 11, 2017. The Brightline Express project is a $1.5 billion investment that will bring high speed train travel to commuters from Orlando to Miami. Photographer: Scott McIntyre/Bloomberg , Bloomberg

(Bloomberg) -- California may again reserve some of a limited financing resource for Fortress Investment Group’s passenger train to Las Vegas next year, a venture that failed to win over investors in 2020.

Based on federal guidelines set annually, the state’s capacity to distribute tax-free private activity bonds is likely to be capped at $4.7 billion in 2023, Nancee Robles, interim executive director of the California Debt Limit Allocation Committee, said during a meeting Wednesday.

In January, the debt committee will decide how to divvy up the bonds in categories such as housing and non-housing uses. Developers would then apply for the debt. This arcane process has become fraught and competitive because since late 2019, demand for the cheap financing has outstripped what the state can give out.

Meanwhile, rising inflation and interest rates are posing more difficulties for developers already coping with California’s high construction costs. Housing advocates have urged that all of the precious allocation be reserved to boosting affordable homes in the state with has the worst homelessness and with the most expensive residential markets.

Still, over the past few years, the board chaired by State Treasurer Fiona Ma -- a supporter of the project -- has favored the Fortress rail line that would shuttle gamblers from southern California to Las Vegas.  In 2020, the board granted its company Brightline Holdings LLC all the financing it requested, about 15% of California’s annual allotment of the bonds, while some affordable housing developers who rely on the same bonds were shut out.

But the company failed to entice investors for its September 2020 debt offering that would have financed a 169-mile (272-kilometer) line connecting Las Vegas to the desert town of Apple Valley, 90 miles away from downtown Los Angeles. Since then, it’s working on a stop at Rancho Cucamonga, which is located along an existing commuter rail and which would position passengers on the electric line closer to the nation’s second-most populous city.

Train executives had said they were planning to seek financing through the $1 trillion federal infrastructure bill that President Joe Biden signed in November 2021.

In January 2022 and 2021, the California debt board reserved some of the coveted capacity for the rail, although bonds weren’t ultimately awarded to it.

“I don’t have anything to provide you today,” Ben Porritt, a Brightline spokesperson, said by email to a request for comment.