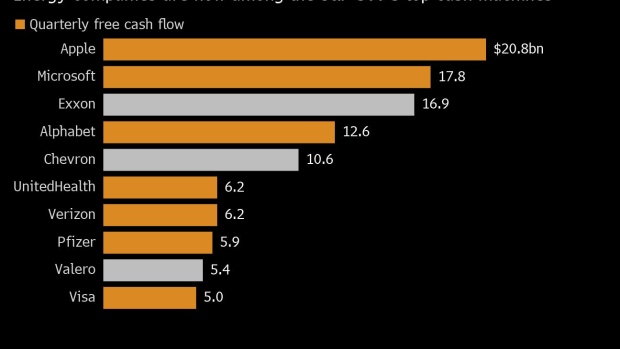 The travelling block hangs beside drill pipes on the derrick of a drill rig during oil drilling operations by Targin JSC, a unit of Sistema PJSFC, in an oilfield operated by Bashneft PAO near Ufa, Russia, on Thursday, Sept. 29, 2016. Bashneft distributes petroleum products and petrochemicals around the world and in Russia via filling stations. , Bloomberg

(Bloomberg) -- The steady flow of financing to fossil-fuel companies is posing increasing risks for banks around the world.

In a report published Tuesday, nonprofit Finance Watch estimates that the 60 largest global banks have about $1.35 trillion of credit exposures to fossil-fuel assets.

The potential climate-related losses associated with these assets aren’t covered by the companies’ existing capital, according to Finance Watch. To address the shortfall, the research group estimates the banks will require additional capital of $157 billion to $210 billion, which equals about three to five months of the companies’ 2021 net income.

Meantime, the industry continues to provide financing to fossil-fuel companies. In the first nine months of this year, banks led by Wells Fargo & Co., RBC Capital Markets and JPMorgan Chase & Co. helped arrange loans and bond sales totaling about $397 billion, down 16% from a year earlier, according to data compiled by Bloomberg.

This year’s decline reflects the record rally in crude prices, which has generated huge cash flow for oil and gas producers and allowed the companies to lower their debt levels.