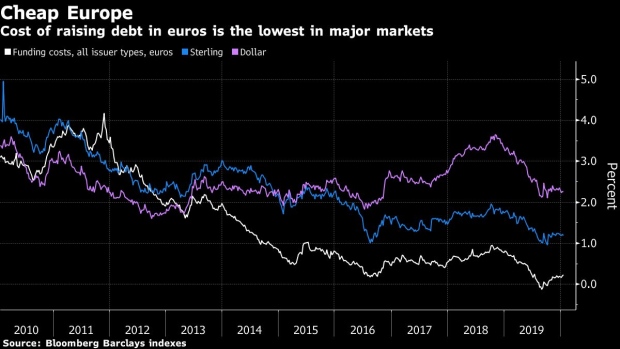 (Bloomberg) -- Europe’s primary bond sales have started the year at record pace, including a first-ever $100 billion week, highlighting the market’s transformation into a global funding hub.

The deluge has come from all corners of the world, as low borrowing costs and central-bank support help entice more global issuers into the region’s debt markets. A growing euro investor base also means more companies can sell longer maturities or complex products such as hybrids, helping the market compete with dollar debt.

Here are four charts showing the growth of the high-grade euro credit market.

A trans-Atlantic divergence in borrowing costs has been a key driver in Europe’s bond-market boom. Euro bond yields have generally fallen since mid-2013 as the European Central Bank seeks to revive economic growth through stimulus measures including negative interest rates and debt purchases. By contrast, dollar yields have been largely flat or higher. The euro market’s cost advantage has also weathered this year’s bond-supply surge, with high-grade spreads holding near the lowest since May 2018.

Companies have been at the forefront of Europe’s bond boom, with the high-grade euro non-government market almost doubling in size since early 2012. The growth has come from both local and international borrowers, including U.S. companies such as Apple Inc. and Medtronic Plc selling euro notes to tap cheap funding and match against local revenue. Political factors and wariness about over-reliance on dollar funding may encourage more international issuers to sell euro notes, potentially including Chinese companies. The Asian nation sold a euro sovereign deal in November.

Longer tenures are the fastest-growing part of the euro high-grade credit market, as investors seek an escape from shorter notes carrying low or negative yields. The outstanding amount of 10 year-plus notes has surged by more than 50% in the past year to about 215 billion euros ($240 billion), according to a Bloomberg Barclays index. The segment has also tripled in size since early 2010, outpacing marketwide growth of 73%. Investor appetite for longer bonds helped non-financial companies syndicate about 7 billion euros of 30-year senior euro notes last year, or more than the previous 10 years combined.

A sales boom for euro high-grade credit means the sector has started to narrow a size gap versus the $6.6 trillion dollar market. The outstanding universe of euro notes is now more than 40% the size of the dollar market, up from just 33.5% in late 2016, based on ICE BofA indexes. The euro space is already six times as big as sterling and dwarfs the yen market.

To contact the reporter on this story: Tasos Vossos in London at tvossos@bloomberg.net

To contact the editors responsible for this story: Hannah Benjamin at hbenjamin1@bloomberg.net, Neil Denslow