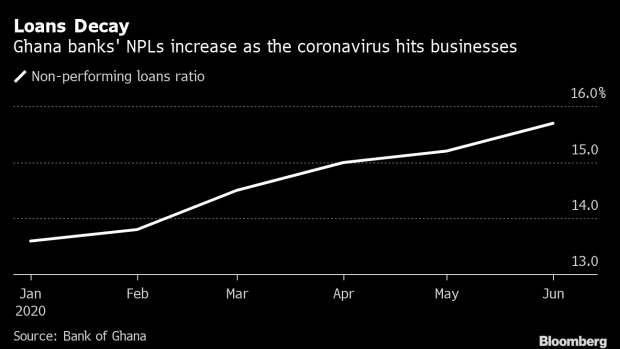 A man uses a smartphone as he walks along a busy highway in Accra, Ghana, on Monday, Sept. 19, 2016. Ghana's central bank expects mergers and acquisitions among lenders to increase as regulators prepare new rules that will boost the amount of cash that they need to set aside. Photographer: Ty Wright/Bloomberg , Bloomberg News

(Bloomberg) -- The worst economic performance in 37 years is poised to weigh even more heavily on the earnings of Ghanaian banks as provisions soar in the wake of the coronavirus pandemic.

First-half profit across the industry slowed to the lowest level since lenders reported losses in the first six months of 2017, as lending decelerated and impairments soared, according to central bank data.

“We expect Ghanaian banks to continue to accumulate higher provisions in the next few quarters in anticipation of potential weaker asset quality,” Christos Theofilou, a vice president and banking analyst at Moody’s Investors Service Inc., said in an email. “This will continue to weigh on the profitability of the Ghanaian banks.”

The following charts highlight the struggles and outlook for banks:

The government expects the economy to expand 0.9% this year -- the slowest pace since 1983 when the country suffered a famine -- thanks to devastating effects of the health crisis

While lenders granted repayment holidays of at least six months and lowered interest rates, it was not enough to prevent loan losses. Consolidated Bank Ghana Ltd. increased impairment charges by 38 times, and the local unit of Absa Group Ltd. by 362%.

Using the first six months as a base, provisions could double for the full year compared with 2019 as the fallout from Covid-19 takes hold, George Bodo, chief executive officer of Nairobi-based Callstreet Research and Analytics, said in an email.

Credit growth eased to 13.7% in June, the slowest pace in 18 months, according to central bank, and will probably decline further to about 12% for the year, Bodo said.

“Demand has not been as you would have had in a normal business cycle,” John Awuah, deputy chief executive officer of the Ghana Association of Bankers, said by phone. Lenders are looking for “bankable projects” to help cushion the economy, he said.

The Ghana Stock Exchange Financial Stocks Index, which tracks the performance of banks and insurance companies, lost 15% so far in 2020, heading for its worst year in four.

Still, investments that banks have made in high-yielding debt securities could help keep banks profitable, Alex Boahen, head of research at Databank Group in Accra, said by phone.

“We see advances remaining sluggish, but bottom-line growth being sustained by increases in investment securities,” he said.