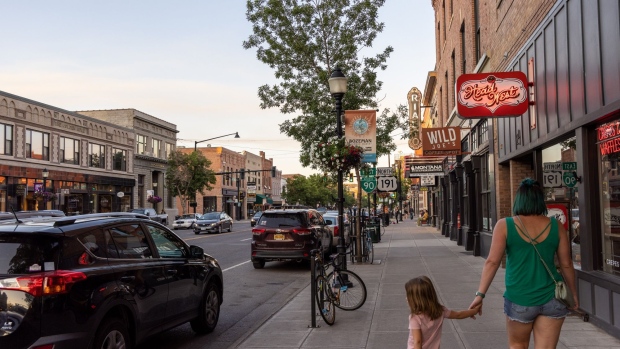 Pedestrians walk along Main Street in Bozeman, Montana, US, on Tuesday, July 19, 2022. Across Montana's 147,000 square miles, the state government recently counted 57 charging stations, most of them clustered in towns and cities rather than along the highway. Photographer: Louise Johns/Bloomberg , Bloomberg

(Bloomberg) -- Colorado, Montana, New York and Oregon are set to receive as much as $750 million overall to provide capital for small businesses under the State Small Business Credit Initiative, the Treasury Department announced Friday.

The initiative, started in 2010, was reauthorized under the American Rescue Plan Act of 2021 to give a combined $10 billion to states, territories and tribal governments for job creation and pandemic recovery. Among the approved uses of the money are venture capital investments, loan programs, collateral support and help for small businesses competing for state contracts.

“We know that during the peak of the pandemic, minority-owned small businesses were hit the hardest and that’s why we intentionally designed the program to drive investments to under-served entrepreneurs,” US Deputy Secretary of the Treasury Wally Adeyemo said during a call with the media.

Treasury has announced approval of 19 state plans so far for more than $2.25 billion in initiative funding, adding to billions in aid from ARPA.

“This really gives us the lift we need, the investment we need, to be able to go to our small business community and say we are here to help you,” New York Governor Kathy Hochul said during the call.