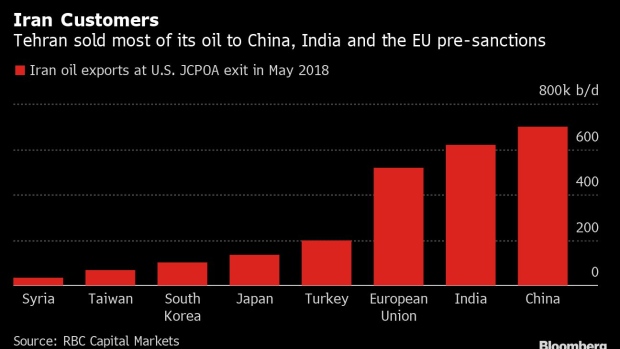 (Bloomberg) -- The Iranian nuclear talks could hardly be more critical for oil traders.

Crude prices have surged 10% this year to around $85 a barrel, with many analysts predicting it’s only a matter of time before they hit triple digits for the first time in eight years.

Whether they rush to that level or retreat hinges in large part on Iran’s potential return to global energy markets. The Islamic Republic is locked in negotiations in Vienna with world powers including the U.S. Their diplomats are trying to revive a 2015 accord that limited Tehran’s atomic activities in return for an easing of sanctions.

If they strike a deal, Iran may be able to raise exports enough that crude prices fall.

The talks are this year’s “wildcard” as far as oil production’s concerned, according to Bank of America strategists including Francisco Blanch. It’s “the largest risk looming over oil markets.”

Here’s how the market might react to different outcomes.

A new pact that’s similar to the 2015 agreement, which the U.S. pulled out of in 2018, would be the most bearish outcome for oil traders.

Tehran could sell some of the roughly 80 to 90 million barrels it holds in storage, many of them located in its main market of Asia. It would increase production at oil fields at the same time. Output might climb from around 2.5 million barrels a day -- most of them consumed by local businesses -- to 3.8 million within six months, according to the International Energy Agency, which advises rich countries.

Refiners in China, which last week disclosed its first imports from Iran in more than a year, would probably be among the first buyers of extra shipments.

They are already the main customers for what oil is exported, much of it disguised as coming from other countries to get around U.S. sanctions. Iranian foreign sales of crude and a light form of oil known as condensate averaged roughly 641,000 barrels a day last year, Kpler Ltd. estimates.

Bank of America says Iran’s exports in the year after any comprehensive deal would add up to 400 million barrels, enough to tilt global oil balances into a surplus. The lender sees oil soaring to $120 a barrel by mid-year but then falling to an average of $71 in the fourth quarter, in part because of additional Iranian supplies.

There’s increasing talk of an interim agreement -- despite public denials by Iran -- that falls short of restoring the so-called Joint Comprehensive Plan of Action.

It’s unclear if Tehran would get any relief on oil sanctions in such a scenario. If not, that would be a bullish signal for markets. Still, it could at least cool geopolitical tension in the Persian Gulf and reduce some of the many shipping and drone attacks that have been blamed on Iran or its allies.

FGE, a London-based consultancy, is among those predicting Iran will get significant concessions on energy exports even under a partial deal. It sees one being struck in the second quarter and Tehran boosting crude sales to around 1.3 million barrels a day by the end of the year.

Deep divisions continue to plague the negotiations, which have dragged on since April 2021. That’s lead diplomats to contemplate a state of limbo setting in over the next several months.

“So much still has to be worked out,” said Helima Croft, chief commodities strategist at RBC Capital Markets LLC.

Goldman Sachs Group Inc. says the most likely scenario is that a agreement isn’t reached until the end of this year, with Iran only increasing oil production in 2023. Even then, its return is “unlikely to be rapid,” according to the bank, because fields, pipelines and other infrastructure probably haven’t been properly maintained since 2018.

The Wall Street lender forecasts that Brent crude will rise to $100 a barrel in the third quarter and average $96 for the year as a whole.

The most bullish outcome for oil is if the Vienna talks breakdown, with Iran or one of the other powers walking out.

“So much has changed since 2015,” said Croft. “Iran is now a nuclear-threshold state. Would they be willing to relinquish that status? It’s not guaranteed.”

A failure could cause an uptick in shipping and drone strikes in the region -- including on oil facilities, such as last week’s assault by Houthi rebels on an Abu Dhabi fuel depot or the 2019 bombardment of Saudi Arabia’s critical Abqaiq crude-processing plant. With markets increasingly nervous about the dwindling spare production capacity available to cover disruptions, such an attack could easily trigger a price spike.

If Israel or the U.S. launches airstikes against Iran in a bid to demolish its nuclear sites, crude could jump by as much as 15%, according to Eurasia Group. That would take it close to or above $100 a barrel at today’s prices.