A new alliance emerged among some of billionaire Stanley Ho’s 17 children in the decade-long family battle for his Macau casino empire, and eldest daughter Pansy looks the likely victor.

Ho announced that she had joined up with some siblings and the Henry Fok Foundation and would hold a combined 53 per cent in Sociedade de Turismo e Diversoes de Macau, which controls casino operator SJM Holdings Ltd. The alliance gives her the upper hand over Angela Leong, the fourth wife of 97-year-old Ho, and her main rival in the battle for control of Macau’s original gaming company.

Here are four people to watch as the family saga over control of the nearly US$6 billion business continues. 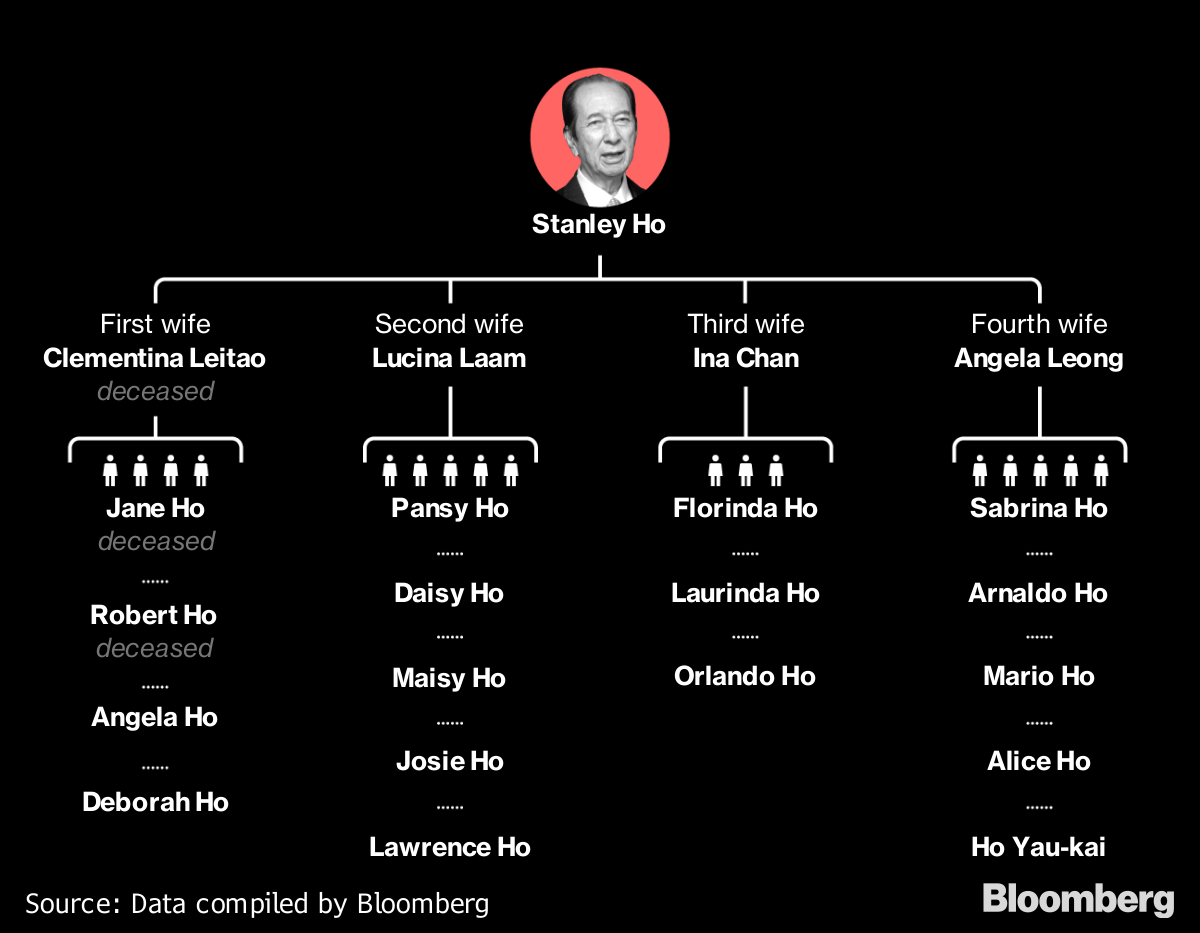 Born in 1962 to Stanley and his second wife, Lucina Laam King-ying, Pansy studied marketing and business at Santa Clara University in California before pursuing a brief TV acting career in Hong Kong. She eventually ended up running Shun Tak Holdings Ltd., a publicly-traded conglomerate that operates ferry and helicopter services linking Hong Kong and Macau. She was appointed managing director of Shun Tak during Macau’s handover from Portugal to China in 1999, and became chairman after her father stepped down in 2017.

Pansy helped form MGM China in a joint venture with billionaire Kirk Kerkorian’s MGM Resorts. The company raised US$1.5 billion in an initial public offering on the Hong Kong Stock Exchange in 2011.

Billionaire Leong is the co-chairman of SJM, one of six companies authorized to operate casinos in Macau, and is a STDM director. SJM has 20 casinos, about 1,700 gaming tables and more than 2,400 slot machines. SJM shares slipped 2.6 per cent to HKUS$6.8 as of 12:02 p.m. in Hong Kong. The shares have gained 8.3 per cent this year.

Leong was born into a wealthy military family in Guangzhou in 1961. She met the tycoon in 1986, and backed by him, built a sprawling property business. She also became a member of the Legislative Council of Macau.

Her real estate holdings include the Entertainment Building, the Bank of China Insurance Tower in Hong Kong, L’Avenue Shanghai in China and L’arc Macau in Macau.

Lawrence, Stanley’s son with Lucina, worked at Citibank and Jardine Fleming after returning to Hong Kong from studies at the University of Toronto. Despite being quoted as saying he doesn’t like gambling, Lawrence eventually joined the family business. In 2006, he became chairman and chief executive officer of Melco International Development Ltd., a Hong Kong-listed entertainment group, which includes Nasdaq-listed Melco Resorts & Entertainment Ltd. He ended a partnership with Australian billionaire James Packer after working on four casinos together.

After obtaining a bachelor’s degree in marketing from the University of Southern California and a master’s of business administration degree in finance at the University of Toronto, Daisy became chairman and executive director of SJM Holdings. She is also CFO of Shun Tak Holdings, chairman of the board of the Hong Kong Ballet and vice-chairman of charity provider Po Leung Kuk.

Daisy has been a committee member of the Chinese People’s Political Consultative Conference of Tianjin since 2008.