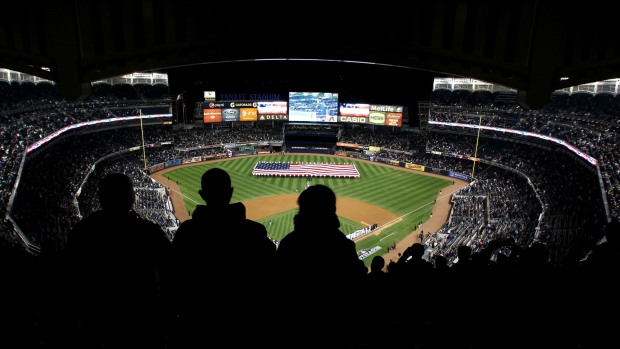 NEW YORK, NY - OCTOBER 13: Fans stand as a giant American flag is stretched across the outfield during the performance of the National Anthem between the New York Yankees and the Detroit Tigers during Game One of the American League Championship Series at Yankee Stadium on October 13, 2012 in the Bronx borough of New York City, New York. (Photo by Alex Trautwig/Getty Images) , Photographer: Alex Trautwig/Getty Images North America

Fox Corp. is buying 4.99 per cent of gaming giant Stars Group Inc. (TSGI.TO) and starting its own sports wagering platform -- by far the biggest media investment yet in the burgeoning U.S. sports-betting market.

The media company controlled by Rupert Murdoch and his family will pay US$236 million for its stake in Toronto-based Stars, which last year bought Sky Betting & Gaming for $4.7 billion, Stars Chief Executive Officer Rafi Ashkenazi said in an interview.

The deal sent shares of Stars Group up as much as 11 per cent in extended trading before being halted. The Toronto-based company had risen 5.9 per cent this year through Wednesday’s close.

The companies will jointly launch Fox Bet later this year, offering two products designed to stake a claim in the growing world of online betting. One will be free to play, offering customers cash and prizes for predicting the outcome of sports games. The other will offer the chance to place real money wagers in states with regulated online betting.

Free-to-play games are an effective way to convert customers to real money games, and they drive customer acquisition and engagement, Ashkenazi said.

As part of the deal, Stars Group will get an exclusive license to use certain Fox Sports trademarks for up to 25 years, and has agreed to spend an undisclosed amount each year advertising on Fox Sports outlets. Stars Group also operates PokerStars.

Additionally, Fox Sports within the next 10 years will have the right to acquire up to 50 percent of Stars Group’s U.S. business. Domestic sports betting, online casinos and poker could become a US$9 billion revenue market by 2025 when wagers, sponsorship and advertising are all tallied up, Fox Sports CEO Eric Shanks in an interview.

Fox is “looking at betting as an additional pillar to their strategy,” Ashkenazi said. “What would be better than to have a media company with an aligned strategy?”

Stars is essentially recreating in the U.S. what it has with Sky Bet, acquired last year from CVC Capital Partners and Sky Plc. Sky Bet became a dominant player in online gaming by emphasizing technology and capitalizing on its brand recognition. Fox Bet aims to do the same. Sky Bet is one of the few big U.K. betting houses that doesn’t operate brick-and-mortar locations, and as of last year, was home to the U.K.’s largest active online player base.

After selling a swath of its entertainment assets to Walt Disney Co. for US$71 billion, Fox Corp. is focused on the U.S. market for television news, sports and entertainment. It owns the No. 1 cable news channel and networks with rights to, among other things, NFL and MLB games, college football and World Wrestling Entertainment matches.

The deal with Stars will help diversify Fox. The broadcaster now gets over 70 per cent of profit from Fox News, according to Bloomberg Intelligence. The company has invested heavily in sports rights and is also striving to leverage that to drive growth in entertainment at its broadcast network.

Shanks said research shows that customer trust of a brand influences their willingness to wager on its platform. Fox data, he said, shows 27 percent of Americans will have a propensity to bet with the company’s brand, which is more than double the percentage for fantasy brands like FanDuel and DraftKings, where Fox is also an investor, and casino names.

One possibility for Fox is to pair live sports broadcasts with live betting opportunities on the same screen. In other markets, that kind of offering has significantly driven user engagement with the broadcast.

Last year, Fox launched its first gambling-related show, “Lock It In,” which airs on its FS1 cable channel.

Media companies and sports leagues are exploring ways to capitalize on legalized sports betting in the U.S., which got a boost last year when a Supreme Court ruling allowed states to legalize it. In New Jersey, for instance, gamblers wagered more than US$372 million in March.