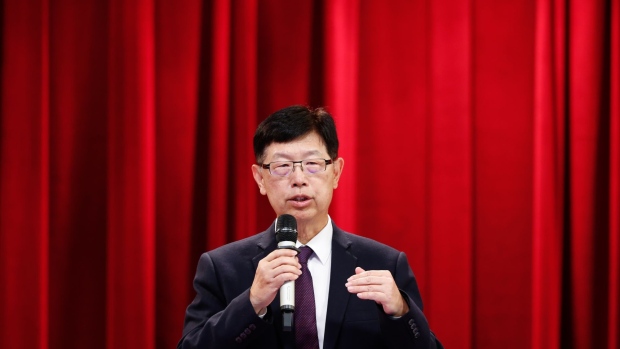 On Friday, it announced its first electric vehicle chassis as well as a software platform that is aimed at helping EV makers deliver models to the market faster. The company also outlined plans to release a solid-state battery by 2024 that could potentially displace the more commonly used lithium-ion batteries in electric vehicles.

Chairman Young Liu, who took over from founder Terry Gou in July 2019, has turned to the emerging automotive, robotics and medical applications sectors to boost profitability amid plateauing growth in smartphone units in recent years. Apple Inc. still accounts for about 50% of overall sales of Hon Hai, also known as Foxconn Technology Group, but the company is seeking to diversify from its role as the assembler of consumer electronic goods like Macbooks and Sony Playstations.

The company is targeting a 10% share of the EV market by as early as 2025, with around 3 million vehicles using its platform, Liu told reporters on Friday.

Hon Hai said earlier this year it will create a joint venture with Fiat Chrysler Automobiles NV to develop and make electric vehicles in China. It is also forging a partnership with Hua-Chuang Automobile Information Technical Center, a unit of the Yulon group, to design electric cars. The Taiwanese company currently supplies some components to Tesla Inc.

The company’s self-driving technology is already being used in some airport shuttles in Japan, executives said Friday.

In 2019, Hon Hai generated close to NT$9.5 billion ($330 million) in sales from automotive components. The company is hoping automotive and other new business can help boost its gross margin to 10% by 2025.