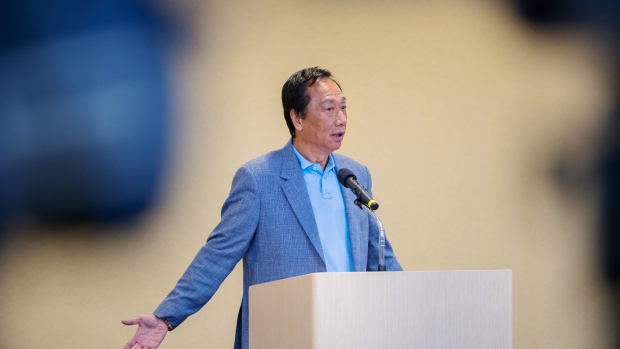 Terry Gou, chairman of Foxconn Technology Group, speaks during a news conference in Taipei, Taiwan, on Monday, May 6, 2019. Foxconn could move some manufacturing facilities to the U.S. and could diversify production locations to avoid China's threat, Gou said. Photographer: Billy H.C. Kwok/Bloomberg , Bloomberg

The billionaire founder of Apple Inc.’s largest supplier asked the U.S. company to move part of its sprawling production chain from China to neighboring Taiwan.

“I am urging Apple to move to Taiwan,” said Gou, the largest shareholder in Hon Hai Precision Industry Co., answering a question about whether Apple will shift production away from China. “I think it is very possible,” he said without elaborating.

The Trump administration’s threat to levy tariffs on some US$300 billion of Chinese-made goods -- including phones and laptops -- has inflamed speculation that Apple will divert some capacity away from the world’s second largest economy. And Hon Hai is the largest of hundreds of Apple-suppliers with factories on the mainland, making most of the world’s iPhones from the central Chinese city of Zhengzhou.

A significant shift of manufacturing from China to Taiwan -- which Beijing views as part of its territory -- may also exacerbate tensions between the two governments. Hon Hai, the main listed arm of the Foxconn Technology Group, is today the largest private employer in China, paying as many as a million mostly migrant laborers to put together everything from iPhones to HP laptops.

Gou, who stepped down as Hon Hai chairman Friday to focus on winning a party nomination to compete in the 2020 Taiwanese presidential elections, had run a company that depends on Apple for half its revenue. It’s unclear how much capacity Gou may have been referring to, nor how feasible a large-scale move -- for Hon Hai or any other Apple supplier -- may be.

The Taiwanese firms that assemble most of the world’s electronics are now expanding or exploring plants in Southeast Asia and elsewhere to escape punitive tariffs on U.S.-bound goods. But the vast majority of their capabilities remain rooted in China. The Nikkei reported this week that Apple asked its largest suppliers to consider the costs of shifting 15 per cent to 30 per cent of its output from China to Southeast Asia, but three major partners to the U.S. company later pushed back against that idea. Hon Hai itself has said Apple hasn’t requested such a move.