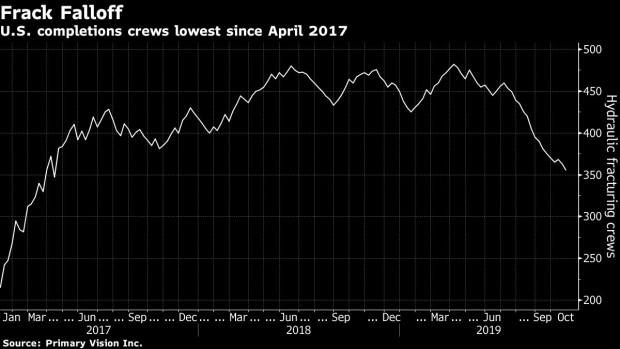 (Bloomberg) -- The downturn in shale drilling has been so steep and brisk that oilfield companies are taking the unprecedented step of scrapping entire fleets of fracking gear.

With almost half of U.S. fracking firepower expected to be sitting idle within weeks, shale specialists including Patterson-UTI Energy Inc. and RPC Inc. are retiring truck-mounted pumping units and other equipment used to shatter oil-soaked shale rock. Whereas in previous market slumps, frackers parked unused equipment to await a revival in demand, this time it’s different: Gear is being stripped down for parts or sold for scrap.

As stagnant oil prices and investor pressure discourage new drilling, the fracking industry that was growing so fast it couldn’t find enough workers as recently as two years ago now finds itself buried in a mountain of pumps, pipes and storage tanks. The contagion is spreading beyond fracking specialists to sand miners and the truckers who haul it. U.S. Silica Holdings Inc., the top supplier of frack sand, tumbled as much as 33% on Tuesday after announcing plans to shut mines on the back of disappointing quarterly results.

“We don’t learn from our mistakes in this industry, do we?” said Joseph Triepke, founder of Infill Thinking LLC and a former analyst at Citadel LLC’s Surveyor Capital. “The U.S. oilfield-service sector has overshot the growth cycle again resulting in a capacity glut. There’s too much of everything, from horsepower to sand.”

Fracking an oil well involves surrounding the hole with an array of pumping trucks and other equipment that shoot high-pressure jets of water, sand and chemicals deep underground. For that reason, capacity is measured in horsepower.

About 2.2 million horsepower, or roughly 10% of industry capacity, already has been earmarked for the scrap heap, according to Scott Gruber, an analyst at Citigroup Inc. In addition to Patterson and RPC, Gruber said industry titans Schlumberger Ltd. and Halliburton Co. probably are retiring parts of their fleets, and at least another 1 million horsepower needs to be eliminated to halt the slide in fracking fees.

A spokeswoman for Halliburton declined to comment. A spokesman for Schlumberger referred to comments by CEO Olivier Le Peuch on a third-quarter earnings call, where the executive said it was too early to give specifics about activity levels.

“Much needed attrition is (finally) materializing,” analysts at Tudor Pickering Holt & Co. wrote in a note to clients. “We wouldn’t be surprised to hear other pumpers jump aboard the fleet retirement train in the coming weeks.”

On a recent day in Odessa, Texas, in the heart of the Permian Basin, more than a dozen well-worn sand-hauling trucks sat parked in a dusty lot owned by RPC’s Cudd Energy unit. It was a similar scene at nearby equipment yards, where everything from drill pipe hooks to rigs sat idle.

Land-based oilfield companies have been more pitiless than their offshore counterparts who stalled and delayed for years before demobilizing some of their most sophisticated and expensive gear. Transocean Ltd. parked deepwater drilling vessels in Caribbean waters at a cost of about $15,000 a day each to await an offshore revival. When it never came, the Swiss-based operator and rivals scrapped rigs that cost billions of dollars to construct.

Estimates for total U.S. fracking capacity vary but Bank of America Merrill Lynch puts the figure at almost 25 million horsepower. Just 13 million of that is forecast to still be at work during the final months of this year, down from 17 million during the second quarter of 2018, according to Bank of America’s Chase Mulvehill.

The number of fracking crews deployed to wellsites across the U.S. already has fallen to the lowest in more than two years, according to Primary Vision Inc.

“We’ll need to see oodles (and oodles) more attrition from other pumpers to clean up this market, absent a notable demand boost,” the Tudor analysts wrote.

--With assistance from Kriti Gupta and Rachel Adams-Heard.

To contact the editors responsible for this story: Simon Casey at scasey4@bloomberg.net, Joe Carroll