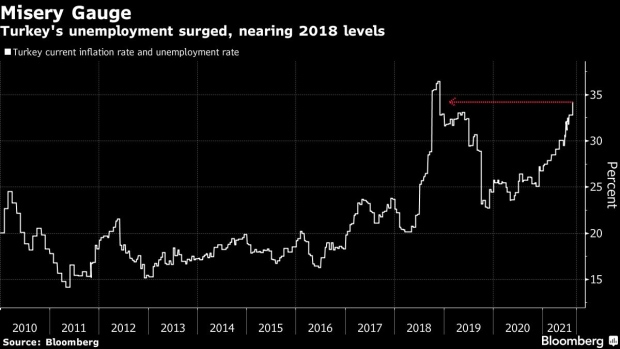 (Bloomberg) -- President Recep Tayyip Erdogan’s push for lower borrowing costs aims to transform the economy into a job-creation engine that’ll keep him in power when elections come around in 2023, but it’s ordinary Turks who are so far paying the price.

Turkey would no longer try to attract foreign inflows by offering high yields and a strong lira, Erdogan announced last week, abandoning a market-friendly approach that helped establish it as a major emerging market but set off a boom-and-bust cycle that’s lasted more than a decade.

As far back as 2013, elevated inflation, a gaping current account deficit and currency pressures saw Turkey listed among the Fragile Five nations heavily reliant on foreign inflows and vulnerable to ups and downs in the global economy.

With his new vision, Erdogan is betting cheaper credit and a weaker lira will boost manufacturing and exports, cut labor costs and increase hiring, reducing the market’s hold on the Turkish economy.

The formula is tried and tested. Export-focused growth has transformed some Asian economies, but time is not on Erdogan’s side. He has less than 18 months to pull off an about-turn that’s taken a generation elsewhere -- and deliver the payoff to voters before they go to the ballot box.

The risks are high. For now, the lurch toward lower interest rates has dragged the lira to record lows and driven inflation above 20%, leaving many Turks struggling to make ends meet. Worst affected are working class families, Erdogan’s traditional base, but even exporters who stand to benefit from a weaker currency are struggling to adjust to the volatility.

This is how Erdogan’s new approach could work and the obstacles he’ll face:

One of Turkey’s key challenges during the Erdogan era has been its chronic current account deficit.

A shift to a weak lira policy could help close that gap as Turkish products become cheaper abroad, earning dollars and euros and drawing foreign direct investment in the real economy. That could eventually help stabilize the lira and reduce reliance on “hot money,” or fickle foreign inflows into securities.

The flip side is that overseas investors have fled Turkish bond and currency markets as yields tumble, while the cost of imports has risen sharply, fueling inflation and putting items such as mobile phones and computers beyond the reach of many.

Turkish stocks are now cheaper for foreigners though, and are attracting strategic investors such as Abu Dhabi’s securities exchange, which announced a partnership with Borsa Istanbul last month.

Erdogan’s hopes rest on turning the trade balance -- a key component of the current account -- in Turkey’s favor. He’s expecting the declining cost of labor as the lira weakens to help Anatolian manufacturers capture a larger share of European markets. Turkish beaches and historic sites also look more inviting to tourists as the weaker currency makes for a cheap holiday.

A rise in consumer inflation in November pushed Turkey’s real yield further into negative territory and well below emerging market peers. That’s already prompted foreign investors to ditch Turkish bonds and the lira in favor of higher returns elsewhere and leaves Turkey in a worse position when the U.S. and other major economies eventually tighten monetary policy.

Even when its yields were more competitive, Turkey was among emerging markets vulnerable to so-called “taper tantrums” that see capital flee higher risk assets when rates in developed economies rise. This time, it stands to be hit harder than some peers.

Erdogan has signaled that’s a price he’s willing to pay to break the hold of markets on monetary policy.

The approach has depleted the country’s foreign currency reserves, however, paradoxically leaving policymakers with fewer tools for now and the economy more vulnerable to an emerging market sell-off as well as unexpected shocks such as the pandemic.

One of Turkey’s first responses to the lira crisis that struck in August 2018 was to shut down lira funding overseas, making it harder for foreign investors to short the currency. Those measures have since been largely reversed but policies seen as hostile at worst and unpredictable at best have combined to hurt investor confidence, with the stock market at historic lows in dollar terms and foreign ownership of Turkish bonds hovering near all-time lows.

Despite Erdogan’s refrain that lower borrowing costs dampen inflation, so far the opposite has happened, largely due to the impact of lower interest rates on the lira. As the currency lost almost 40% of its value against the dollar this year, inflation surged to a 3-year high, while producer prices rose to their highest level since the start of Erdogan’s 19-year rule.

Turkey’s Misery Index, a measure of joblessness combined with cost of living, has been rising since the pandemic and climbed sharply even as the economy rebounded this year.

Erdogan’s plan to break that cycle by creating an export-oriented economy armed with cheap labor means life for ordinary people will get worse before it gets better because currency depreciation feeds through to inflation faster than manufacturers can expand and hire.

And the 2023 election clock’s already ticking.