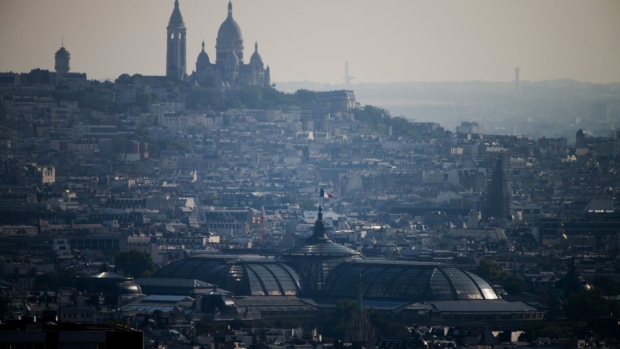 The French national flag flies from the Grand Palais on the city skyline near the Sacre Coeu basilica as viewed from the Generali Baloon hot air research balloon as it carries out air quality checks in Paris, France, on Saturday, July 18, 2020. The French state was scolded by judges for failing to properly tackle air pollution and given a six-month ultimatum to clean up or face millions of euros in fines. Photographer: Nathan Laine/Bloomberg , Bloomberg

France’s 7 billion-euro ($8.3 billion) plan to use clean hydrogen in industrial processes and transport will cut the country’s carbon dioxide output in 2030 by the equivalent of the annual emissions of Paris, the government said.

A global race to scale up green hydrogen has begun, with Europe pushing the fuel as key to the bloc’s future energy mix. But producing clean hydrogen from water using renewable energy is currently costlier than extracting it from fossil fuels, requiring government subsidies to drive down costs.

France will launch tenders as soon as 2021 to create clean hydrogen hubs and electrolyzer factories, targeting 6.5 gigawatts of installed capacity by 2030, the government said Tuesday. It plans to subsidize the use of green hydrogen by refiners and chemicals makers, and the production of equipment such as fuel cells that transform hydrogen into electricity.

“Hydrogen mobility will be one of the essential components of clean mobility, complementary to electric batteries,” Florent Menegaux, chairman of French tire maker Cie. Generale des Etablissements Michelin, said in a statement.

France’s clean hydrogen plan will cut carbon emissions by more than 6 million tons by the end of the decade, the government said.

Michelin and carparts maker Faurecia SE reiterated a plan to invest 140 million euros by 2025 to build a hydrogen fuel-cell plant in France with a production capacity of 20,000 systems. Production of fuel cells will start in two years, Menegaux said.

“Cities with a lot of traffic will develop zero-emission zones,” Menegaux said in Paris Tuesday. “In 2030, we’ll for sure have hundreds of thousands of hydrogen vehicles in Europe.”

Symbio, the name of Michelin and Faurecia’s joint venture, aims to be a hydrogen fuel-cell system leader with a target revenue of about 1.5 billion euros by 2030. The nascent market is currently dominated by companies such as Japanese car giant Toyota Motor Corp. and Canada’s Ballard Power Systems Inc.