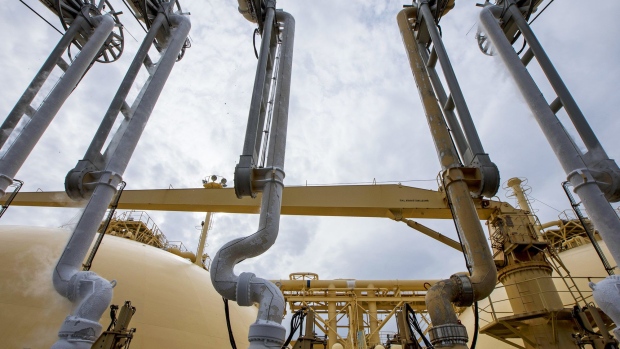 Liquefied natural gas (LNG) dispenses through pipes on-board the Gallina LNG tanker after docking at the National Grid Plc's Grain LNG plant on the Isle of Grain in Rochester, U.K., on Saturday, March 4, 2017. The shipment to England on the Gallina was priced using the U.K.'s National Balancing Point, where front-month gas cost about $7 a million British thermal units on Feb. 7. Photographer: Jason Alden/Bloomberg , Photographer: Jason Alden/Bloomberg

(Bloomberg) -- France, Spain and three other European countries called on the bloc to take urgent action to cushion the blow of skyrocketing gas prices -- and investigate their cause.

Finance ministers of France, Spain, Greece, Czech Republic and Romania issued a joint statement asking the European Union to develop a toolkit to “immediately react to dramatic price surges.” They called for an investigation into the gas market, said the bloc should coordinate purchases to “increase our bargaining power,” and urged an overhaul of power markets.

European governments are struggling to react to a dramatic spike in gas prices, which threatens to plunge citizens into energy poverty, spur inflation, and undermine the post-pandemic recovery. The surge in prices leaves governments hoping for mild weather, and spending increasing amounts of public money to ease the impact on consumers.

The crunch also poses a risk to European policy makers’ plans to push the bloc in the direction of cleaner energy, while countries are divided on one possible solution: bringing more gas from Russia.

The European Commission, the bloc’s executive arm, is set to publish next week a set of measures that national governments can take to ease the impact of high prices. It will offer guidance on how to design emergency responses to ensure they are in line with EU law and don’t undermine the world-leading shift to greener energy.

The five governments called for: