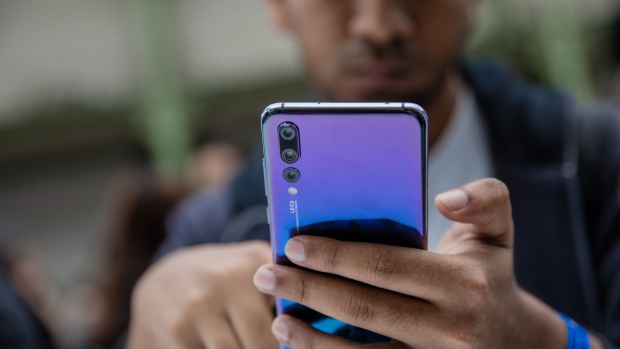 An attendee inspects a P20 Pro smartphone, manufactured by Huawei Technologies Co., during its unveiling in Paris, France, on Tuesday, March 21, 2018. Huawei Technologies Co. is launching the P20 as an upgrade to the higher end of its flagship smartphones, walking in the footsteps of rival Samsung Electronics Co. by betting heavily on the camera. Photographer: Marlene Awaad/Bloomberg , Bloomberg

The head of the country’s cybersecurity agency Anssi said this week it will grant time-limited waivers on 5G for wireless operators that use the Chinese company’s products.

The measure will deter them from choosing Huawei, said Eric Bothorel, who sits on the cyber security committee in France’s National Assembly and presented a 2019 government-backed bill to regulate communications networks.

“Yes, it’s a phasing out” of Huawei, Bothorel said in a phone interview. “It won’t be a total phase-out but there will be much less Huawei in the future network.”

Two of France’s four national mobile operators -- Bouygues Telecom and Altice’s SFR -- use Huawei for parts of their 4G networks and have planned to do so again for 5G. Their Huawei equipment represents about 22% of national wireless infrastructure.

Bouygues Telecom, SFR and the French President’s office, which ultimately decides on the mobile network policies, declined to comment.

The decision reflects a hardening of France’s position on Huawei, the world’s biggest maker of mobile network equipment, which is under threat from a growing U.S.-led boycott.

Western security officials are concerned that Huawei’s systems could be infiltrated by hackers or hostile states. That poses a dilemma for European countries that are relying heavily on Huawei for 5G networks being built to handle fast-growing data traffic and new industrial applications. Replacing the company mid-rollout would be disruptive and expensive.

Britain, which long resisted the pressure from Washington to ban Huawei, now intends to stop using it for 5G as soon as this year, Bloomberg News reported on Sunday.

Until recently, France also sought to strike a middle ground that would allow Huawei to remain an important supplier while keeping it out of some parts of its wireless infrastructure.

Last year President Emmanuel Macron said “our perspective is not to block Huawei or any company,” adding that “France and Europe are pragmatic and realistic. We do believe in cooperation and multilateralism. At the same time, we are extremely careful about access to good technology and to preserve our national security and all the safety rules.”

Anssi’s plan to issue time-limited authorizations of between three and eight years is designed to deter them from using the company due to the uncertainty it creates around major investments, said Bothorel.

The move poses a technical challenge for Bouygues and SFR, which will now think twice before slotting Huawei 5G kit on top of their 4G systems and will have to consider costlier work-arounds.

Poupard said some operators will need to dismantle Huawei equipment. The government has not said whether it intends to compensate them for the disruption.

The move against Huawei adds to the uncertainty around the timing of 5G deployment in France, which was already delayed by the Covid-19 crisis. The government aims to hold an auction of 5G airwaves as soon as September to keep pace with other countries upgrading their networks.

Bouygues executives have called for the tender to be delayed to the end of the year or early next year as companies and households grapple with a deep economic slump caused by the coronavirus pandemic.