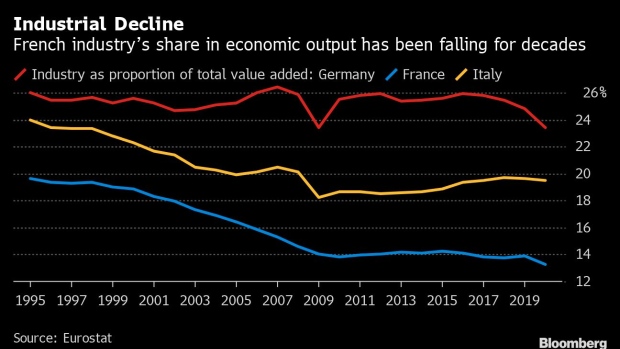 (Bloomberg) -- From factories to cut up fish to facilities to fashion cutting-edge connected components, France’s efforts to lure industry back to the country are paying dividends, according the finance ministry.

In the year since France kicked off spending under its “France Relaunch” Covid recovery program, the state has helped finance 624 projects projects to re-shore production or build new capacity on French soil that could have been located elsewhere. That public money has created or protected a total of 77,000 jobs in industry, the government said in estimates published Monday.

The plans were designed both to repair gaps exposed by the pandemic in strategic supply chains, and to support investment with a social impact in regions that have long suffered from industrial decline.

With just six months to go until elections, President Emmanuel Macron is under pressure to show results from policies he coupled with cuts to taxes on factory output. Earlier this month, he also announced a longer-term program for the development of future industrial sectors dubbed “France 2030.”

“With political will and coherent economic choices, France can succeed in its quest to win back industry,” Finance Minister Bruno Le Maire said.

Under the banner of France Relaunch, the government has handed out almost 850 million euros ($990 million) in state aid to support nearly 4 billion euros of investment. Most of the spending has gone via the program to re-shore strategic output, within which it is split almost evenly between health, electronics, agri-food and industrial inputs.