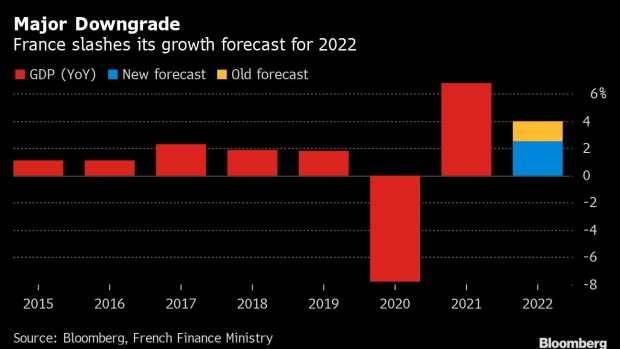 The French government slashed its economic growth forecast on Tuesday, underscoring the constraints on President Emmanuel Macron as he tries to repair public finances from the Covid pandemic and support households struggling with rising prices.

Increased Covid infection rates across much of Europe, driven by the omicron variant, as well as the impact on supply chains of China’s “Zero Covid” policy, have also darkened the outlook, French Finance Ministry officials said.

The government now expects economic growth of 2.5% in 2022 after forecasting 4% at the start of the year, according to the officials, who briefed journalists on condition of anonymity.

The new forecasts will provide the basis for a revised 2022 budget bill the government plans to present next week. Macron, who was re-elected for a second term in April, has promised it will include an array of new spending, from prolonging energy price caps to raising pensions and food checks for the poorest households.

While such measures have broad public backing, passing legislation will be challenging after Macron lost his outright majority in parliamentary elections this month. He is seeking deals with opposition parties, but key possible allies have already refused a formal coalition.

Some groups in the newly formed National Assembly are also pushing for a much broader effort to parry inflation that would include further cuts to fuel taxes. Finance Minister Bruno Le Maire has ruled out anything so costly, however, warning that the country’s public finances are at an “alert level.”

Here are other key elements of the macroeconomic framework for France’s revised budget: