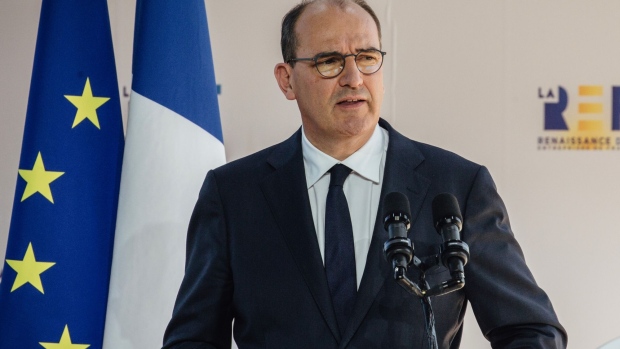 Jean Castex, France’s prime minister, speaks during the Mouvement des entreprises de France (MEDEF) business conference at Longchamp racecourse in Paris, France, on Wednesday, Aug. 26, 2020. France is loosening the purse strings to get the economy back on its feet after months of efforts to stop the progression of the Covid-19 epidemic. , Bloomberg

(Bloomberg) -- French Prime Minister Jean Castex announced a new subsidy program to help contain the impact of a severe spike in energy costs on millions of workers who rely on cars.

French workers earning less than 2,000 euros ($2,325) net a month will receive a one-off payment of 100 euros. Some people will start to get the payment in December, with a full roll-out over the weeks that follow. About 38 million people will qualify for the help, Castex said.

The premier also said the government will block any new increase in regulated natural gas tariffs for households for all of 2022, citing energy experts predicting that a softening of prices will be slower than initially expected.

Record power and gas prices across Europe ahead of winter are forcing governments to step in and offer relief to pandemic-hit consumers. But six months before the presidential election, any intervention in France is particularly delicate.

Emmanuel Macron’s government needs to avoid a repeat of the Yellow Vest protests that started during his second year in office against fuel taxes and later crystallized into a national movement opposed to the French leader’s policies.

Potential rivals are already out campaigning, trying to capitalize on discontent over higher costs for drivers by demanding tax cuts.

Cutting taxes, however, would have a severe impact on France’s public finances just as Macron is trying to bring down record high debt levels after the coronavirus pandemic. According to finance ministry calculations, reducing taxes on gas and diesel by one euro cent would cost the state 500 million euros in lost revenue.

Finance Minister Bruno Le Maire has said a tax cut would also fail to target households in most need of help and potentially undermine Macron’s efforts to discourage the consumption of fossil fuels and fund a transition to a low carbon economy.

Castex said the 100 euros is based on a calculation that takes into account the rise in gas prices at the pumps and an average mileage of 14,000 kilometers (8,699 miles) a year, plus about 80 euros.

In a similar vein to these measures, the government previously raised the value of vouchers poorer households receive for heating costs.

(Updates with details from second paragraph.)