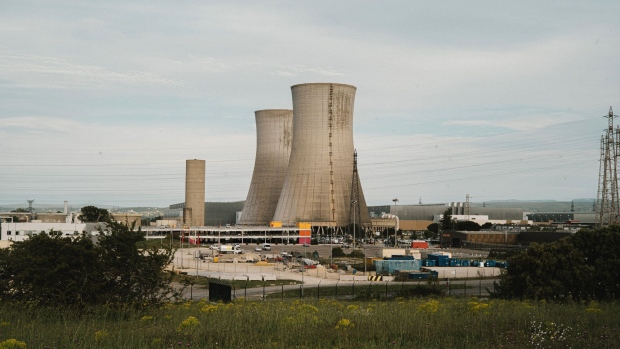 (Bloomberg) -- France must build 14 new nuclear reactors, alongside a surge in renewables investment by 2050, if it is to meet its carbon-neutral goals at the cheapest cost, and without endangering supply, the country’s grid operator said in a report.

It foresees a 35% jump in electricity demand to decarbonize transport and manufacturing, highlights the challenges faced by most countries to fight global warming. It comes as Europe is engulfed in an energy crisis, that lays bare the continent’s dependence on fossil fuel imports.

“The economic assessment of production costs, of flexibilities and of network requirements render scenarios with new nuclear less expensive by 2050 and 2060 ,” Xavier Piechaczyk, Chairman of French grid operator Reseau de Transport d’Electricite, said during a presentation of the report Monday.

The analysis, which studied six main scenarios including an all-renewable power system by 2050, may encourage President Emmanuel Macron to announce the construction of new atomic plants before next April’s presidential election.

Under the cheapest scenario, the power system would cost 59 billion euros ($69 billion) per year by 2060 from 45 billion euros currently, RTE said. That scenario would include the commissioning of 14 new large nuclear reactors and a series of smaller reactors from 2035 and 2050.

Beside cost, other considerations may be taken into consideration by public authorities, including the footprint of the grid and waste treatment, Piechaczyk said. The economic advantage of adding new nuclear plants is based on the assumption that they would benefit from financing conditions similar to renewables, and stress tests show that this benefit would persist in almost all scenarios, he added.

Questions marks over the country’s grid remain as the government wants Electricite de France SA to close a dozen of its aging nuclear reactors by 2035, with many more by the middle of the century. The state-controlled utility’s current nuclear capacity is 61 gigawatts, which generated 67% of the country’s electrical output last year.

Atomic power would fall to 36% of France’s electricity mix if the country were to build just 14 new large reactors without extending the lifetime of reactors beyond 60 years, the report said. That scenario would be almost as affordable as the cheapest option.

That proportion would be 50% by 2050 under RTE’s cheapest scenario, which assumes that some existing reactors are allowed to work for more than 60 years. If no new nuclear plants were built, the annualized cost of the system would reach at least 71 billion euros by 2060, RTE said, due to the need to connect the grid to huge amounts of renewables and storage systems.

Any scenario with a large proportion of renewables. and that maintains 50% of nuclear power present considerable technical challenges, Thomas Veyrenc, RTE’s head of strategy, said Monday.

While most presidential candidates back the construction of new atomic plants -- except for the environmental presidential hopeful Yannick Jadot and one of the left-wing candidates, Jean-Luc Melenchon --, new wind and solar projects sometime face local opposition, leading to a protracted permitting process.

Damaging delays, cost overruns and technical failings have stifled the country’s nuclear sector in recent years. EDF has been repeatedly calling for the launch of the construction of six new reactors to start replacing old ones. Its currently hoping to complete a new atomic plant in Western France next year, way behind schedule and over budget.