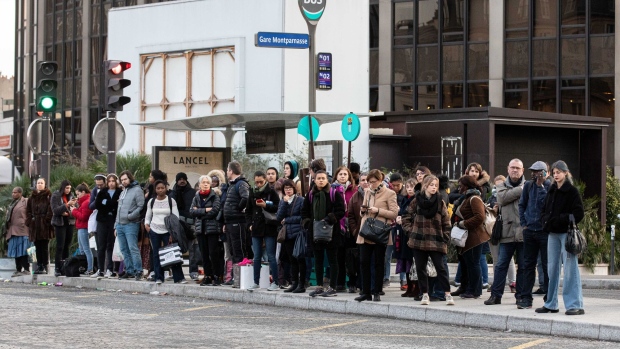 Commuters wait at a bus stop during a nation-wide transport workers strike outside Montparnasse railway station, operated by Societe Nationale des Chemins de Fer (SNCF) in Paris, France, on Tuesday, Dec. 17, 2019. The stalemate between Emmanuel Macron’s government and labor unions deepened as France headed into a third week of transport strikes over the president’s effort to reform the country’s pension system, threatening further turmoil during the busy holiday season. , Bloomberg

France plans to raise the retirement age as part of a second attempt by President Emmanuel Macron to reform the pension system, a top minister told Le Journal du Dimanche.

The only way to secure the system for future generations, he said, is to raise the age of eligibility for retirement benefits. The current minimum retirement age in France is 62.

“I’d rather tell the truth to the French, even if it can be sometimes hard to hear,” Attal told the newspaper.

Attal didn’t say what the new retirement age would be, but he said adopting the reforms would save a gross amount of 8 billion euros ($7.75 billion) by 2027.

France’s government will try to consult with the opposition, Attal said, even though the prospects for getting their backing may be tricky since Macron’s party no longer holds an absolute majority in Parliament since June’s elections.

Macron previously tried to make pension reform but it was put on hold in 2020 during the coronavirus pandemic. In late 2019 and early 2020, Macron’s government faced rolling strikes, at times paralyzing transport in Paris, over concerns about changes to pensions.

Attal didn’t dismiss the possibility of resorting to article 49.3 of the French constitution, which under certain conditions allows the government to adopt a law without approval from parliament.

On Monday, Attal will present the budget for next year with Finance Minister Bruno Le Maire. It’s expected to cap the increase in gas and electricity bills to 15%, and bring in income tax cuts worth 6.2 billion euros. Attal said the government plans to reduce the share of public spending through to 2027 to 53.8% of GDP from 57.6%.

Attal also said Macron’s government will reduce inheritance taxes over his term, which ends in 2027, but the measure won’t be included in next year’s budget.