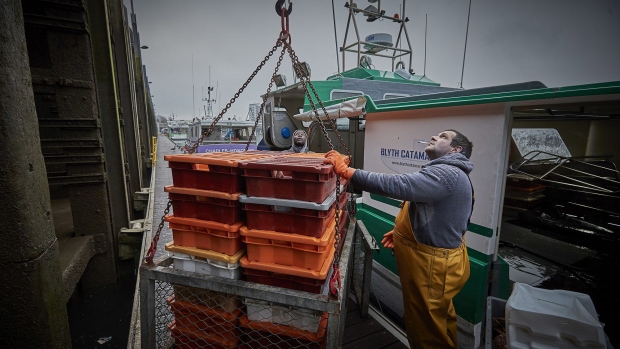 BOULOGNE-SUR-MER, FRANCE - DECEMBER 08: Fishermen unload their catch in Boulogne-sur-Mer, France's largest fishing port, where the bulk of the fish landed is caught in British waters, on December 08, 2020 in Boulogne-sur-Mer, France. Although fishing is a small part of the economy both in the European Union and the United Kingdom, the issue of fishing rights carries emotional and political weight in both places. The 27-nation bloc is looking to maintain extensive access to UK territorial waters in exchange for special access to its single market, but the UK is looking to ensure its fishing fleets can claim a larger share of annual fishing quotas. A final deal must be agreed to by the EU member nations, and fishing rights are an especially sensitive issue in France, which shares a long nautical border with the UK. (Photo by Kiran Ridley/Getty Images) , Photographer: Kiran Ridley/Getty Images Europe

France will decide over the coming days on possible actions if its fishermen don’t get access to U.K. waters in accordance with the Brexit deal.

One response could be preventing U.K. fishermen from offloading their catch in French harbors, said Clement Beaune, France’s minister for European affairs.

“We aren’t asking for a favor, we are asking the U.K. to implement the Brexit accord,” Beaune told France 3 TV. “Dialogue has resumed, because we have raised our voice with the British in the past few days.”

Beaune acknowledged “some improvement” in the situation as a result, said it has been “largely insufficient.”

The French prime minister’s office will detail the potential retaliation measures in the next few days, Beaune said. He’s previously threatened to increase prices to export French energy to the U.K. -- but added that Paris wouldn’t just cut off power. The implementation of an agreement over financial ties has already been stalled.

U.K. Trade War With EU Is Averted, For Now: Beyond Brexit

France gave the U.K. until the end of October to approve licenses for French fishermen who’ve historically fished in U.K. waters, before taking retaliatory measures.

These fishing rights are at the heart of current tensions between Paris and London, with France saying that Britain has been slow in granting the permits despite authorities and fishermen having provided all the requested documents.