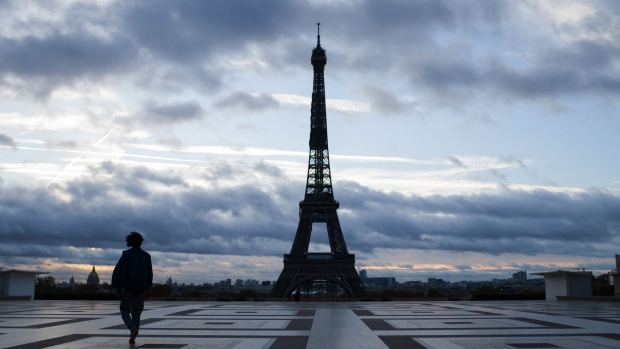 A solitary pedestrian crosses the Trocadero Square near the Eiffel Tower in Paris, France, on Monday, Nov. 2, 2020. Europe’s economic recovery is being cut short as governments implement new restrictions to fight the coronavirus that risk driving the region toward another recession. Photographer: Nathan Laine/Bloomberg , Bloomberg

(Bloomberg) -- The French government plans to ease measures put in place against the deadly coronavirus in three steps as infections recede, while keeping some restrictions in place to contain the epidemic.

A first easing will take place “around” Dec. 1, followed by a second one before end-of-the-year holidays and a third from January, government spokesman Gabriel Attal said in an interview with Le Journal du Dimanche.

Confinement measures and travel limitations will remain in place for some time, while venues that have been shut such as restaurants and bars will still face restrictions, Attal told the newspaper. President Emmanuel Macron, who’s due to speak Tuesday, will detail the government strategy for the weeks to come, he said.

Macron faces a difficult balancing act between relieving strained hospital workers and reviving a weakened economy. He’s facing an outcry from owners of small “non-essential” shops who want to reopen as soon as possible. But the epidemic, which has killed more than 48,000 people in France since March, continues to surge.

France, which is working on its vaccination strategy, has already signed three contracts with drugmakers, and is in advanced talks for at least three other deals, the government spokesman told the newspaper, without giving more details.

Meanwhile, the country may take additional measures to isolate contaminated individuals and those who have been in contact with them, Attal said.