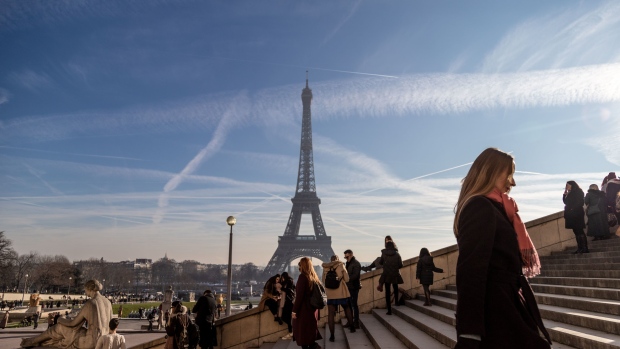 Tourists visit Trocadero Place for views of the Eiffel Tower in Paris, France, on Tuesday, Dec. 31, 2019. The French government is hoping the strikes against its pension reform plans may be starting to wind down as President Emmanuel Macron prepares to make his traditional New Year's address. Photographer: Anita Pouchard Serra/Bloomberg , Bloomberg

(Bloomberg) -- France is pledging 1.91 billion euros ($2.2 billion) to help boost the country’s appeal as a tourism destination in a plan presented by Prime Minister Jean Castex on Saturday.

Renovating hotels, cafes, restaurants and other facilities to make them more eco-friendly, for example by boosting bicycle tourism, is part of the plan, according to emailed press documents from the prime minister’s office. France will simplify rules to encourage investments in the tourism industry and to make jobs in the sector more attractive.

“We want to conquer and reconquer talent,” Castex said, according to an emailed transcript of the speech. “There’s an increasingly strong desire for sustainable tourism.” France also needs to offer “higher quality” tourism, which will require digital investments, he said.

The goal is to make the country the top sustainable tourist destination by 2030, according to the documents.

European travel and leisure stocks including Accor SA slumped on Friday after Austria said it would enter a new lockdown and Germany wouldn’t ruled out a similar move amid a brutal spike in Covid-19 cases.

While there are reassuring signals in France with regard to bookings for winter sport resorts, “the context remains fragile” due to the new pandemic wave hitting Europe, Castex said in his speech today.

The hospitality sector was one of the most impacted by the pandemic, but France had been losing out to destinations such as Spain and the U.S. even before Covid-19, Le Figaro reported earlier.

So-called health passes allowed the French to go back to restaurants, cultural venues and travel destinations, but the sector is still suffering from a shortage of workers, Castex said today.

The hotelier Accor, Pierre & Vacances-Center Parcs, which operates holiday villages and residences, and the tourism operator Voyageurs du Monde are among French stocks that could be active on Monday after the announcement.