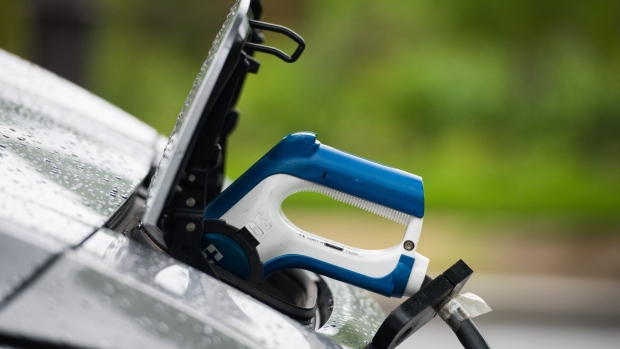 A charging plug in an Uber driver's Nissan Motor Co. Leaf electric vehicle (EV) at a Belib charging station at the Petit Palais in Paris, France, on April 13, 2022. Uber leans heavily on its experiences in Paris and London in a report that serves as something of a road map for electrifying its ride-hailing business and partnering with industry and policymakers. , Bloomberg

France is readying a plan to subsidize electric-car leasing as part of President Emmanuel Macron’s campaign pledge to make them more affordable.

The scheme will make EVs available for 100 euros ($100) a month, Budget Minister Gabriel Attal said Sunday on LCI television, noting that the cost is less than what many people spend on gasoline. The government is working on how quickly the measure can be rolled out and the availability of EVs, he said.

Macron promised a state-sponsored leasing program for low-income households to counter criticism that even with subsidies, EVs are still out of reach for many.

The French government offers subsidies of as much as 6,000 euros for the purchase of EVs costing less than 47,000 euros, with possible additional aid under a cash-for-clunkers program for old combustion-engine vehicles. EVs represented 12% of new car sales in France in the first seven months of 2022.

“We know that for many French they remain very expensive,” Attal said Sunday.