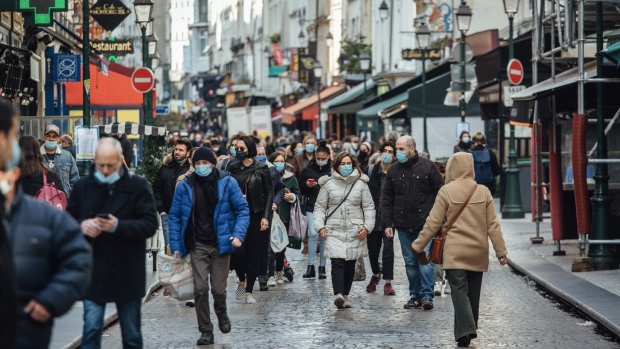 Pedestrians crowd Rue Montorgueil ahead of a new lockdown in Paris, France, on Friday, March 19, 2021. French President Emmanuel Macron is locking down several regions including the Paris area, slowing down the country’s economic recovery as it struggles to contain a third wave of the coronavirus epidemic. Photographer: Cyril Marcilhacy/Bloomberg , Bloomberg

The French government is pushing to preserve the country’s standout economic recovery, shunning snap lockdown measures despite the surge in Covid cases that is rattling peers around Europe.

The relative recent strength of the euro area’s second largest economy is being put to the test by a sharp acceleration in the spread of the coronavirus with health authorities reporting 30,454 new cases on Tuesday -- the highest daily number since August.

Yet even as other European countries impose restrictions including a full national lockdown in Austria, President Emmanuel Macron’s government said on Wednesday that it will limit its action to an acceleration of its booster-shot campaign and a stricter enforcement of social distancing rules and the Covid health pass.

“We have set a clear course: avoiding a return to capacity limits, and even more so a return to closures, curfews or lockdowns,” government spokesman Gabriel Attal said after a meeting of France’s defense cabinet.

With less than five months to go until elections, shielding the economy from another plunge is a key objective for Macron. France has recorded stellar growth in recent months that has returned output to pre-crisis levels much sooner than the government initially expected and before other European economies.

The boom has been driven by a resurgent services sector that is showing little sign of being held back by Covid health passes that are mandatory to enter restaurants and cultural venues.

Less reliant on industry, the French economy has also suffered less than Germany’s from the global supply chain difficulties hurting factory output. The divergence was reflected in business confidence readings on Wednesday that showed a drop for the fifth straight month in Germany and a surprise increase in France, where a cross-sector measure rose to the highest level since June 2007.

“I’ve no particular concern for French growth -- it’s there, it’s solid and is based on healthy fundamentals,” Finance Minister Bruno Le Maire said on French Info radio Wednesday. “From one wave to another, we have learned to better manage public health restrictions.”