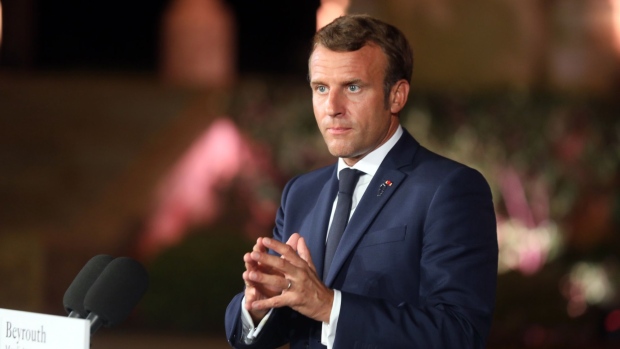 Macron was tested after showing mild symptoms of the disease and will isolate for seven days and continue to work, according to the statement. An official at the Elysee Palace declined to provide details on the circumstances of the infection or where the president will be isolating.

The diagnosis, days before Macron’s 43rd birthday, comes at a particularly sensitive time. France is struggling to tame a resurgence of the virus, with the president fielding criticism of his handling of the crisis and the economic fallout. He’s also trying to push through controversial plans to bolster the powers of the police while dealing with the closing stages of Brexit.

As Europe seeks to emerge from a second wave, European Union authorities are pushing for a compressed approval timeline for the Covid-19 vaccine from Pfizer Inc. and BioNTech SE to enable a rollout on the continent before Christmas.

Macron is the third leader of a Group of Seven nation to contract the virus, after U.S. President Donald Trump and U.K. Prime Minister Boris Johnson -- who wished the French leader a “speedy recovery” in a Tweet.

“I am whole-heartedly with you,” European Commission President Ursula von der Leyen said on Twitter. “Together, we will defeat this pandemic.”

France imposed a second partial lockdown in October. It reported 17,915 new cases in 24 hours on Wednesday, and 289 new deaths. A curfew was lifted this week and the government will be easing restrictions further for the Christmas holidays, and while businesses are open, museums, cinemas and theaters remain closed.

In Germany, Chancellor Angela Merkel has imposed a nationwide lockdown that will extend over Christmas and hinted it could slip into January as well. In the U.K. Johnson is allowing households to mix over the holiday.

France expects to receive 1.16 million doses of the Pfizer-BioNTech vaccine by Dec. 30, Castex said in a parliamentary debate. He said France, in coordination with other European countries, will do “everything possible” to start vaccinating in the last week of the year.

France is counting on a further delivery around Jan. 5, and an additional 1.6 million doses in February.

Macron was due to travel to Lebanon next week. He met with the Portuguese Prime Minister Antonio Costa for a working lunch on Wednesday.