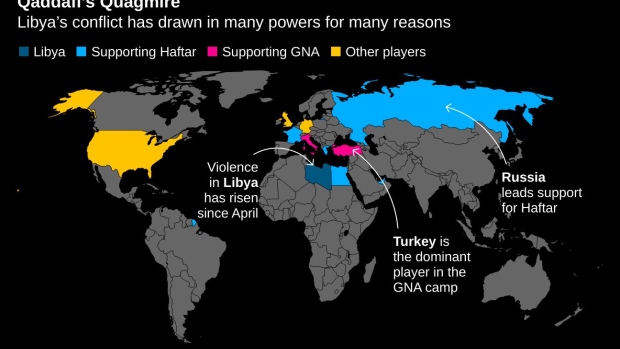 Libyans check the site of an air strike in which three children were killed and others wounded on the southern outskirts of the capital Tripoli on October 14, 2019. , Photographer: Mahmud Turkia/AFP via Getty Images

(Bloomberg) -- To see the limits of French President Emmanuel Macron’s go-it-alone forays into foreign policy look no further than the Libyan conflict.

Macron’s attempt to fix North Africa’s biggest crisis by holding a peace summit outside Paris in 2017, hosting Fayez al-Sarraj, Libya’s United Nations-backed prime minister and his rival General Khalifa Haftar, ended with promises of a cease-fire and elections. Macron tweeted a video of himself shaking hands with both men, captioned: “Libyan people deserve this peace. We owe it to them.”

But just hours after the meeting at Chateau de La Celle, fighting resumed, and Haftar, fortified by a boost in international legitimacy, said he had his eye on the capital, Tripoli.

Today Libya is a nation in name only. Haftar’s forces have laid siege to Tripoli for 10 months, and France is increasingly marginalized in a region where it was once the dominant player. When Libya is discussed this weekend at the Munich Security Conference, it will be Russia and Turkey who are the diplomatic heavyweights.

“In Libya, France mainly has political tools at its disposal, whereas Russia has both military and diplomatic leverage,” said Fyodor Lukyanov, who heads the Council on Foreign and Defense Policy which advises the Kremlin. “Macron has many ambitions, in Libya and elsewhere, but you need to be able to back that up with something, and that’s a problem for France.”

The Munich meeting follows one in Berlin last month hosted by German Chancellor Angela Merkel in her own attempt to staunch the conflict, building on UN efforts to reach a cease-fire, disarm militias and launch new economic measures. But progress depends on stopping weapons flows into Libya, and that hasn’t happened.

Russia and its mercenaries, along with Egypt and the United Arab Emirates back Haftar, who’s based in the east and leads the self-styled Libyan National Army. Turkey gives military support to Sarraj’s Government of National Accord.

Macron was just two months into his presidency when he organized the Libya summit. Fresh from decisive elections that kept the extreme right out of power, and with Merkel seemingly a lame-duck in Germany, the U.K. tied up with Brexit and the U.S. withdrawing from the Middle East under President Donald Trump, he portrayed France as the defender of the liberal, democratic order.

“France never stops making itself heard,” he said said in a 2018 address to French ambassadors. Under Macron, it would use its influence to “enable us to make our globalization a little more human and humanist.”

And with domestic problems quickly piling up, foreign policy presented an opportunity to shine. Libya was just the start of a flurry of diplomatic activities that have included attempts to broker talks between Iran and the U.S., Russia and Ukraine.

But he doesn’t have much to show for all that. His big ideas -- like an unsentimental, root-and-branch rethink of the North Atlantic Treaty Organization and enhanced European integration and defense cooperation -- have all met with passive resistance.

Macron’s decision to give legitimacy to Haftar, over the opposition of allies such as former colonial power Italy, had a certain logic. Haftar controlled most of the oil in Libya, which has Africa’s biggest reserves, and he was moving his forces down toward the remote southern desert. Bristling with guns, smugglers and extremists groups, the region’s instability was spilling across borders into West Africa where 5,000 French troops have led the fight against the spread of Islamist militant groups.

France saw Haftar as a bulwark against Islamist militants, but it ended up with the opposite coming true, said a senior European official. Even if Haftar is able to capture Tripoli, the official said, his forces wouldn’t be able to control the city, and it would end up being as unstable as the Somali capital, Mogadishu.

French officials insist Paris is neither pro-Haftar nor pro-Sarraj, and only supports UN efforts. They still regard the summit outside Paris a success because they put enemies in the same room. The need is to bring them back to the table to comply with the commitments made at the summit, a French diplomat said last month before the Berlin summit.

While some European diplomats say that since the Berlin conference Macron’s position has moved closer to that of its EU allies, others say that France still agrees with the U.A.E. that Haftar is key to checking the power of the Islamist militants.

It’s not game over yet, but whatever the outcome, France’s role in the region has suffered. It’s facing rising anti-French sentiment in western Libya, as well as in the West African states battling Islamist militants inspired by al-Qaeda and Islamist State where it’s not uncommon to see protesters burning the French flag.

A frustrated Macron last month summoned the leaders of the five most embattled West African nations to a meeting to elicit their explicit confirmation that they supported the deployment of his troops. It came after 13 French soldiers were killed when their two helicopters collided in Mali, just as they were swooping in to support troops battling Islamists.

Macron’s failure to broker a peace deal was part of a pattern in French diplomacy. A decade before, then President Nicolas Sarkozy allowed Moammar Qaddafi to pitch a tent in the gardens of Hotel de Marigny and receive a salute by the French Republican Guard at parliament -- all in the name of trade deals and restoring France’s role in North Africa.

Later, Sarkozy switched to being a champion of intervention in Libya’s uprising in 2011, pushing for NATO-led air strikes and he was the first to acknowledge the rebel leadership as the country’s legitimate government -- again without consulting European allies.

“France does not have the means to restore its role in North Africa like it has been trying to since 2007, since when France has been seeking a comeback,” says Jalel Harchaoui, a research fellow at the Clingendael think thank covering Libya. “France doesn’t get a B or even a C in the region; it gets an F.”

But even the Russians, with their increased influence in the region, are sanguine about the prospects for peace.

“Libya’s too much of a mess,” said Lukyanov. “There’s no solution in sight.”

--With assistance from Henry Meyer and Patrick Donahue.

To contact the reporters on this story: Ania Nussbaum in Paris at anianussbaum@bloomberg.net;John Follain in Rome at jfollain2@bloomberg.net;Sylvia Westall in Dubai at swestall@bloomberg.net

To contact the editors responsible for this story: Caroline Alexander at calexander1@bloomberg.net, Karl Maier, Mark Williams