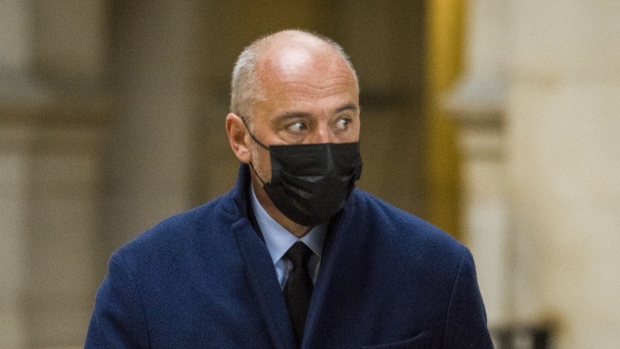 Stephane Richard arrives at the court in Paris, on Nov. 24. , Bloomberg

(Bloomberg) -- Orange SA is hunting for a new leadership after Stephane Richard was found guilty of aiding and abetting the misuse of public funds.

The telecom company’s board, meeting Wednesday night, decided new leadership should be nominated by Jan. 31 at the latest, according to a statement. Richard will keep running the company in the meantime.

After leading the French company for a decade, Richard was found to have helped the late Bernard Tapie cheat the government out of about 403 million euros ($453 million) in 2008, a court ruled earlier Wednesday.

Richard said in a statement he will lodge an appeal with France’s top court to overturn his “profoundly unjust” conviction.

Although Richard’s third mandate as CEO of Orange was due to end in May, the executive had planned to split the top roles at the French company and stay on as chairman.

Orange didn’t decide whether to split the top roles at the board meeting Wednesday. The jobs could be shared between a current executive and an outsider, according to people with knowledge of the discussions.

The French state owns 23% of Orange and views the company as one of its key investments. A top finance ministry official previously said that Richard must step down if he is convicted.

Prior to the court decision, a person at the French Ministry of Economy told Bloomberg News an outside CEO could bring valuable experience to the company, which has seen its share price drop 38% during Richard’s tenure.

French firms with significant state backing have traditionally been run by local executives. However over recent years executives from outside, such as Air France, led by Canadian Ben Smith, and Renault, run by Italian Luca De Meo, have been seen as successful appointments.

A potential candidate for the executive director role could be found inside the company, including the head of Orange France Fabienne Dulac, the CFO Ramon Fernandez, or the head of innovation Michael Trabbia, the people said.