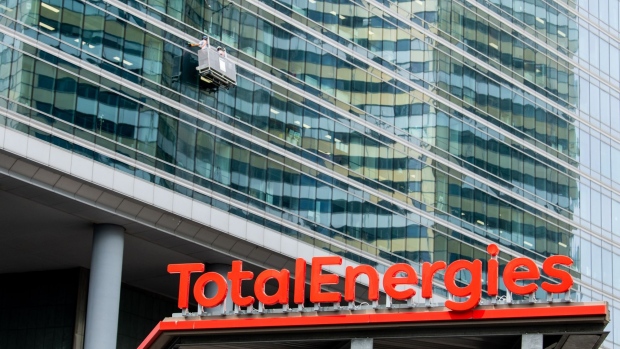 Signage for TotalEnergies SE at the company's electric vehicle charging station in the La Defense business district in Paris, France, on Thursday, July 28, 2021. TotalEnergies will extend its $2 billion buyback program into the third quarter after profit surged to a record, propelled by surging gasoline prices and soaring demand for natural gas in Europe. , Bloomberg

(Bloomberg) -- TotalEnergies SE said it spotted an aerial drone close to an oil field in the Danish North Sea, intensifying concerns of an energy conflict erupting in Europe.

Unusual drone activity was seen near its Halfdan B oil and gas field on September 28, the French company said by email on Thursday. The incident was first reported by Danish newspaper Ekstra Bladet.

TotalEnergies increased “vigilance around security for all of our offshore assets and onshore locations,” the company said.

Leaks discovered earlier this week on natural gas pipelines Nord Stream 1 and 2 in the Baltic Sea are widely suspected of being the result of sabotage, touching off heightened security on energy infrastructure across Europe. Several governments said the damage was “deliberate,” with Finland noting that only a state actor could pull off acts on such a scale.

“I just hope that there is no idea behind it to extend the war beyond the border of Ukraine to the North Sea,” Total Chief Executive Officer Patrick Pouyanne told Bloomberg in an interview this week.

Halfdan B field is located about 210 kilometers (130 miles) west of the Danish coast. Denmark has stepped up safety measures around energy installations since the Nord Stream gas pipelines leaks, which occurred close to the country’s Baltic Sea island of Bornholm.