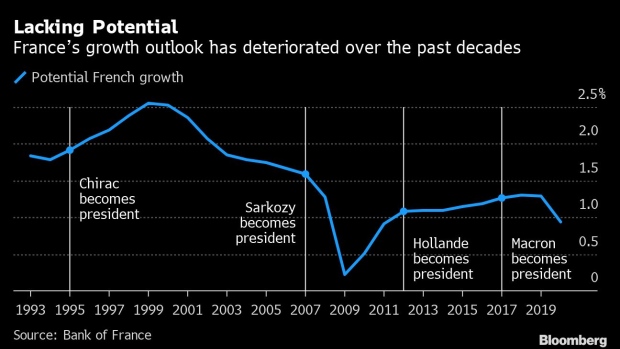 (Bloomberg) -- The governor of France’s central bank waded into the economic debate ahead of presidential elections in April, warning candidates they have little room to promise tax cuts or spending increases and should focus instead on improving labor supply to raise growth potential.

Addressing students at Paris Dauphine university, Francois Villeroy de Galhau said the growth outlook has dwindled in recent decades due to a lack of qualified labor, despite relatively high unemployment and plenty of public spending and available capital. He called for improvements in education and apprenticeships, as well as an overhaul of the country’s pension system.

Villeroy said France also needs a combination of measures that would improve training, discourage reliance on unemployment welfare, and allow pay increases in some areas that are not attractive to workers. The government should aim to raise potential growth to between 1.5% and 2% from below 1.5% currently, he said.

“All these levers on labor supply should be added together, instead of being opposed in our public debate,” Villeroy said. “They should be pursued with perseverance, rather than remaining ephemeral announcements,”

Beyond additional efforts to improve labor supply, Villeroy said the rivals have little room to offer voters in the way of lower taxes or more spending. The current trajectory of public spending and economic growth means France’s debt ratio would be at best stabilized in the coming years -- a situation Villeroy said would be unsustainable.

He called for France to define a strategy to better control public spending growth over the long term, in addition to efforts to boost economic growth.

“‘The public debate today is seeing a multiplication of proposals for new spending and additional tax cuts,” Villeroy said. “The reality, and it must be said, is that our country has the means for neither one nor the other.”