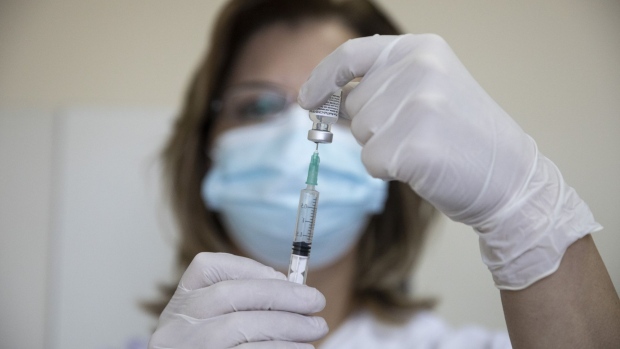 A nurse prepares to administer the Pfizer-BioNTech Covid-19 vaccine during the vaccination campaign at AHEPA Hospital in Thessaloniki, Greece on Tuesday, Dec. 29, 2020. After inoculations in Europe started with fanfare last weekend, authorities are now grappling with ways to ensure widespread uptake without sowing further discontent among the pandemic-weary public. Photographer: Konstantinos Tsakalidis/Bloomberg , Bloomberg

(Bloomberg) -- France is taking the lead in defending Europe’s faltering vaccine program and it’s taking a jab at the U.K. in the process.

“The Brits are in an extremely difficult health situation,” France’s junior minister for European Union affairs, Clement Beaune, said on France Inter radio on Tuesday. “Understandably, they are taking many risks in this vaccination campaign.”

Beaune cited the U.K.’s decision to focus on the first vaccine jabs and its reliance on AstraZeneca Plc despite doubts over its efficiency on older people. “I don’t think citizens would accept us taking risks that contradict scientific recommendations,” he said.

With nations all over the world counting on Covid-19 vaccines to return to normal life as swiftly as possible, delivery delays in Europe announced by vaccine-makers Pfizer Inc and AstraZeneca sent chills through the bloc -- which is trailing the U.K. when it comes to vaccination -- and gave ammunition to anti-EU politicians like Marine Le Pen in France.

Beaune defended the EU’s decision to purchase the doses in common, an approach that avoided a race between member states and put the bloc’s less affluent countries on an equal foot with its richest countries such as Germany or France.

Read more: Faced With a Vaccine Emergency, the EU Made an Enemy of Everyone

Had countries purchased vaccines on their own, “each government -- imagine Germany, France, Italy -- would be calling labs to have doses delivered to get in ahead of their neighbors,” Beaune said. Buying the vaccine in common also allowed the EU to obtain better prices.

In France, a country of 67 million inhabitants, about 1.5 million people have received the jab. It plans to give the first dose to 2.4 million more patients by end February, compared to an initial target of 4 million. Government officials have defended their strategy by insisting on the need to focus on most vulnerable people first, and on obtaining their consent as well as following scientific guidelines on doses.

France’s Health Agency is set to give its green light to AstraZeneca’s vaccine later Tuesday, but it’s unclear if it will be recommended for people over 65.

With some hospitals starting to transfer patients to relieve pressure on intensive-care units and more contagious forms of the virus on the rise, the French government is closely monitoring indicators and remains ready to move quickly if a third lockdown is needed.

For now, President Emmanuel Macron is holding off calls for a full lockdown, as he seeks to navigate pressure from doctors to contain the new coronavirus variants and the need to protect the economy, while avoiding the risk of civil disobedience amid mounting fatigue. Instead, he strengthened curfew controls, imposed extra border checks and announced the closure of malls.