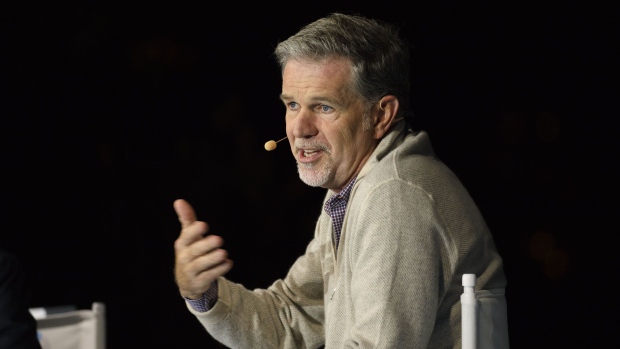 Netflix Inc. signage is seen on an Apple Inc. laptop computer in this arranged photograph taken in the Brooklyn Borough of New York, U.S., on Monday, Jan. 14, 2019. Netflix is scheduled to release earnings on January 17. Photographer: Gabby Jones/Bloomberg , Bloomberg

(Bloomberg) -- France is finalizing a bill to force video-on-demand services from Netflix Inc., Amazon.com Inc., Apple Inc., Walt Disney Co. and others to invest at least 25% of their revenue derived in the country to fund local productions.

The French legislation falls under a European Union directive requiring such companies to ensure that at least 30% of their catalogs are comprised of European-made content. The French Culture Ministry, which shared a presentation made Tuesday in Paris with Bloomberg, didn’t comment on how France is planning to measure sales of the platforms in France.

Parliament will debate the bill beginning in March and it would be enacted after a late-summer final vote, including details of the services’ obligations, the ministry said.

The rule is part of France’s broader push for what it has dubbed its “cultural sovereignty in the digital era.” It aims at buoying national traditional media players in the face of the growing success of foreign entertainment platforms. France is also going to relax broadcasting and advertising rules that were designed in part to protect French cinema and keep people going to movie theaters.

The National Center for Cinema and Animated Image, the governmental body overseeing French productions and funding, estimates Netflix and equivalent platforms accrued sales in France of about 500 million euros ($556 million) in 2018, which would make for an investment of about 125 million euros, French newspaper Les Echos reported on Tuesday.

--With assistance from Lucas Shaw.

To contact the reporter on this story: Helene Fouquet in Paris at hfouquet1@bloomberg.net

To contact the editors responsible for this story: Giles Turner at gturner35@bloomberg.net, Molly Schuetz