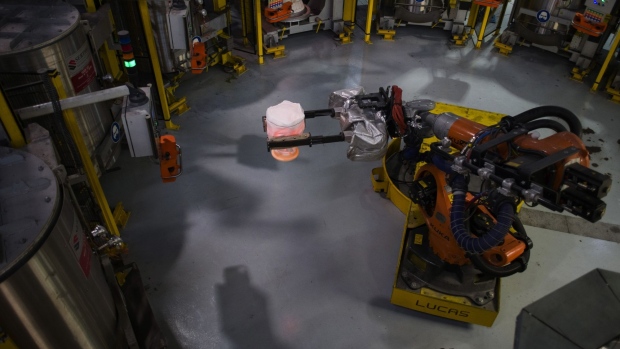 A robotic arm moves a fusion mold on the jet engine turbine blade production line at the Safran SA aircraft engine component plant in Gennevilliers, France, on Wednesday, March 17, 2021. The Gennevilliers plant is gearing up for the future by investing in the development of new 3D modeling software and new production processes, according to Safran's website. Photographer: Nathan Laine/Bloomberg , Bloomberg

(Bloomberg) -- France is considering measures to ease the burden on manufacturers struggling to cope with high energy prices, including short-term aid and longer-term plans such as new regulation of nuclear power sales, according to government officials.

The country and its neighbors are trying to find ways to overhaul market rules as a gas-supply crunch recently pushed the cost of the fuel and electricity to records, prompting trade groups representing energy-intensive companies to call for emergency relief.

The French government is considering ways to trim the cost of carbon dioxide emissions paid by manufacturers that are most exposed to non-European competition, officials at the ecology ministry said, speaking on the condition they wouldn’t be named. An already-announced tax cut on electricity consumption will curb manufacturers’ bills by 200 million euros ($233 million) next year, they said.

The government will also set up a working group with business federations to see how companies can obtain affordable electricity over the long term, according to the officials. The group will also seek to foster long-term electricity contracts based on nuclear and renewable output, and some state-owned financial institutions may be called in to provide some payment guarantees, they said.

The working group will consider ways for manufacturers to keep benefiting from regulated prices for Electricite de France SA’s nuclear output when the current system expires at the end of 2025, according to one of the people.

However, France and the European Commission, which is in charge of ensuring fair competition in the European Union, have failed in recent months to reach an agreement on a new nuclear regulation. Soaring energy prices in the EU are encouraging French authorities to pursue work on updated rules, the government officials said.

Under the current system, EDF’s rivals have the option to buy more than a quarter of the company’s French nuclear output at a hefty discount to current wholesale prices. France wanted EDF to sell almost all its atomic power at slightly higher price, while the Commission sought to ensure that rivals of the state-controlled utility wouldn’t lose out.

An immediate increase in the volume of regulated nuclear power sales isn’t on the agenda because it would require the Commission’s approval, one of the people said.