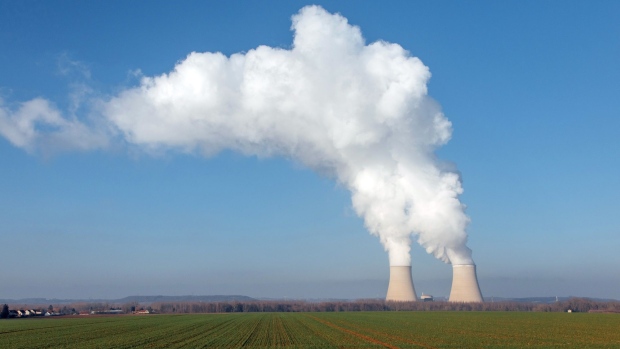 Electricity pylons and power lines near the Paluel nuclear power plant, operated by Electricite de France SA (EDF), in Paluel, Normandy, France, on Monday, Jan. 24, 2022. France, located at the heart of Western Europe's power grid, with its fleet of nuclear reactors has for decades been the continent's largest electricity exporter, supplying the U.K., Spain, Italy, Switzerland, Belgium and Germany at times of peak demand. , Bloomberg

(Bloomberg) -- The French government will nationalize its financially-struggling nuclear giant Electricite de France SA  to help it ride out Europe’s worst energy crisis in a generation.

“The climate emergency requires strong, radical decisions. We need to have full control of the production and our energy future. We must ensure our sovereignty faced with the consequences of the war and the colossal challenges ahead,” Prime Minister Elisabeth Borne said during her policy speech in parliament in Paris on Wednesday. “That is why I confirm today the intention of the state to hold 100% of the capital of EDF.”

Borne didn’t provide specific details on the nationalization of EDF, which is 84%-owned by the state. President Emmanuel Macron had said during his re-election campaign in March that part of the company should be nationalized to bolster French energy independence and its net-zero ambition by building new atomic plants.