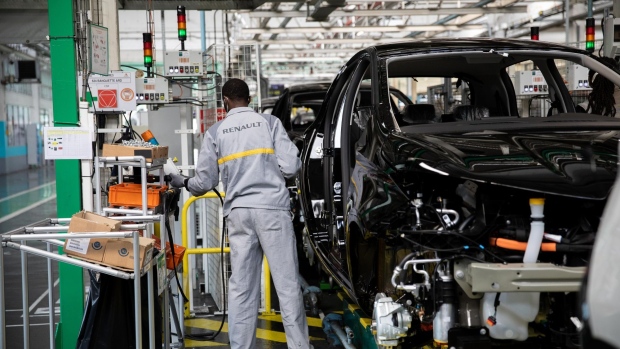 An employee selects a hand tool on the Nissan Micra hybrid automobile assembly line at the Renault SA factory in Flins, France, on Wednesday, May 6, 2020. European car sales were almost wiped out in April after governments around the continent closed auto dealerships and other businesses to slow the spread of the coronavirus. Photographer: Christophe Morin/Bloomberg , Bloomberg

France risks losing one in four auto jobs as the country struggles to keep pace with the rapid transition to electric vehicles.

The French auto industry -- home of the Peugeot, Citroen and Renault car brands -- could see as many as 100,000 of its 400,000 jobs lost in the next decade as the era of combustion engines ends, according to Luc Chatel, head of auto lobby La Plateforme Automobile.

Chatel blamed high production costs and said the government will need to help car and parts makers with the costs of the transition. The PFA estimates roughly 17 billion euros ($19.7 billion) will be needed across the industry within five years.

“We still haven’t solved our competitiveness problem,” Chatel told an industry conference on Tuesday, noting that auto assembly is significantly cheaper than in Spain and eastern Europe. “The stress on many companies’ balance sheet is very real.”

The pressure on automakers like Renault SA and Stellantis NV -- owner of the Peugeot and Citroen nameplates -- was brought into focus as Tesla Inc.’s Model 3 outsold all conventional rivals to become the top-selling vehicle in Europe last month.

French labor costs are 30% higher than the European average, while production costs are a fifth more, according to Renault Chief Executive Officer Luca de Meo, who was speaking at the conference. The company is planning to stop vehicle production at a factory outside Paris in the coming years.

President Emmanuel Macron, who is facing an election next year, has been keen to show he’s seeking to reverse France’s industrial decline. Earlier this month, he unveiled a 30-billion-euro plan that includes a goal of producing 2 million electric and hybrid vehicles in France.

Renault, which has the state as its most powerful shareholder, is creating an electric-vehicle production hub in northern France, including a battery plant. While the automaker has also pledged to make 700,000 vehicles at home at mid-decade, it wants to cut roughly 6,600 jobs in the country. The company made 686,000 vehicles in France in 2019 and 514,000 in 2020.