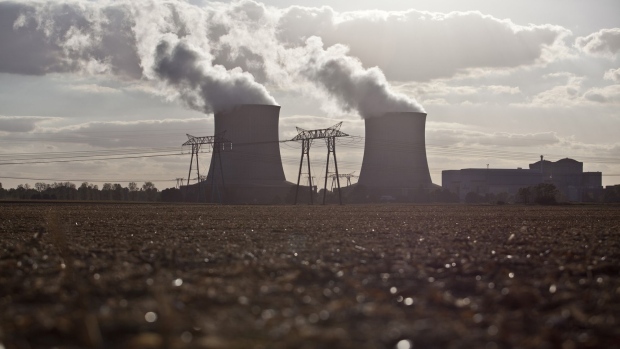 (Bloomberg) -- France should reconsider its plan to halt a dozen of Electricite de France SA’s atomic reactors by the middle of the next decade, as recent unplanned outages and an expected increase in electricity demand highlight risks to energy security, the country’s nuclear regulator said.

“Within five years, we’ll have to revisit the planned decision to halt 12 reactors by 2035,” Bernard Doroszczuk, the head of France’s nuclear safety authority, told reporters on Wednesday. “We must really weigh this decision, given the power production needs and the need to keep margins in the electricity system in case of unexpected events.”

President Emmanuel Macron, who closed two reactors in 2020 and has pledged to shut more in order to reduce the country’s reliance on nuclear energy, recently announced that EDF should build new reactors to replace some of its 56 aging units. His main challengers in April’s presidential elections -- Marine Le Pen and Valerie Pecresse -- want to build new atomic plants, though they differ on the future role of renewable energy.

However, long permitting and construction timelines mean that no new reactors would be built before 2035, except for one due to be commissioned next year after years of delays, EDF has said.

To extend the lifetime of some of its oldest units beyond 50 years, state-controlled EDF should start improving its ability to prove the plants’ safety as soon as possible, according to the head of the Autorite de Surete Nucleaire, the regulator.

In the near team, EDF could face new plant outages if corrosion cracks recently found on key pipes of four of its biggest reactors are detected at other plants, Doroszczuk said. The reasons for the cracks are still being investigated, he added.

If they were to worsen, current issues at Orano SA’s nuclear-fuel recycling plants could also force EDF to halt some reactors if the utility isn’t able to dispose of the spent fuel, according to the regulatory chief. EDF is late in building a new pool to store that spent fuel, he said.

In the longer term, France and EDF face the daunting task of progressively replacing older reactors in the utility’s fleet, which provides more than two-thirds of France’s electricity output. Most of the units were commissioned in the 1980s and 1990s.

If France wants to build new atomic plants and extend the life of most of EDF’s reactors to 60 years, the industry will need to hire 4,000 engineers per year for a long period, according to Doroszczuk. EDF should prove within five years that this lifetime extension can be safely achieved, or France will need to seek alternative solutions, he said.