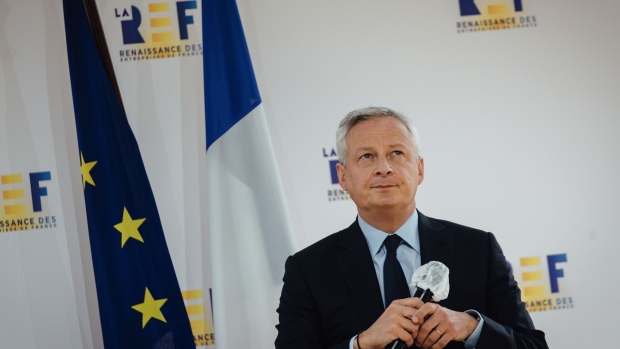 Electricity cables outside a residential apartment in the Barceloneta neighborhood of Barcelona, Spain, on Thursday, July 29, 2021. Scorching heat is boosting electricity prices across Europe, adding to a long list of factors that have sent power costs surging this summer. Photographer: Angel Garcia/Bloomberg , Bloomberg

“The single European electricity market does not work, it is an aberration,” he said Friday in a wide-ranging interview on PublicSenat. “We need to review how this single market works from top to bottom.”

Le Maire’s comments come amid a gathering energy crisis in Europe spurred by rising prices and the possibility of a natural gas shortage. A long and bitter winter left gas storage sites depleted, and refilling them over the summer wasn’t easy, with top supplier Russia curbing flows to the continent.

France’s power mostly comes from nuclear and hydroelectric stations and is relatively cheap to produce, yet the EU market aligns prices to natural gas, according to Le Maire.

“We get the full hit from the increase in gas prices while we are independent in terms of electricity production,” he said. The market “works according to obsolete rules” that are creating added costs for households.

Le Maire said he plans to put a proposed revision of the single power market on the EU table as early as Monday during a ministerial meeting.

The French government is also mindful ahead of next year’s election of just how politically-explosive energy prices have been in the past.