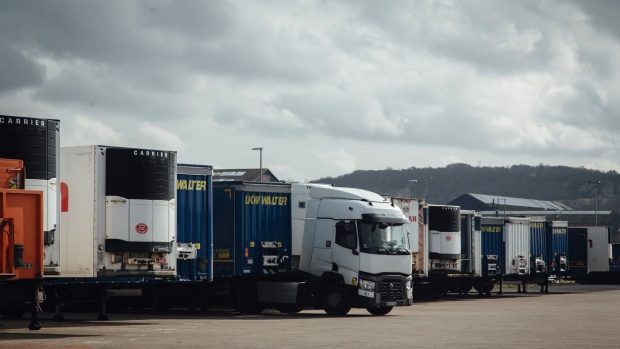 Haulage truck trailers at the Port of Cherbourg in Cherbourg, France, on Wednesday, March 3, 2021. The cost of shipping goods from France to Britain has surged in the past year both because of Brexit and the coronavirus, high-frequency data show. Photographer: Cyril Marcilhacy/Bloomberg , Bloomberg

France will exempt truck drivers from the latest requirement requiring a Covid-19 test to enter the country in order to avoid long lines of trucks like the ones seen late last year in Kent.

The government is tightening rules on travel to France in a bid to contain the spread of the omicron variant of the coronavirus.

From Saturday, travelers coming from outside the European Union will need to provide a negative test taken within 48 hours, even if they are vaccinated. EU travelers will be asked to provide a test taken less than 24 hours before they arrive, but only if they aren’t vaccinated, the government spokesman said Wednesday. The testing requirement could be extended to vaccinated travelers from the EU by the end of the week, after EU coordination, he said.

Truck drivers, at least, will be excepted, transport minister Jean-Baptiste Djebbari said in a response to a tweet.

In December 2020, France briefly closed its borders with the U.K., including for freight, just as U.K. Prime Minister Boris Johnson was battling a surge in coronavirus infections that pushed the country to lock down London and surrounding areas. That also coincided with the final stretch of negotiations if the terms of a post-Brexit trade deal with the EU.

The border closure triggered long lines, fears of food shortages and panic buying in the U.K., but the situation returned to normal after France allowed truck drivers to take rapid tests to cross the border.