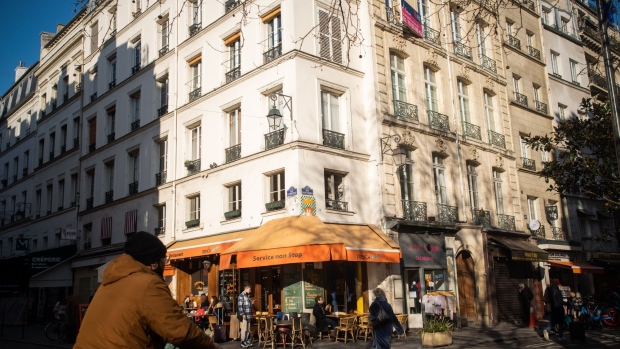 A cyclist and pedestrian pass a restaurant in Paris, France, on Monday, Jan. 24, 2022. France will relax some Covid-19 restrictions from early next month in a bet the pandemic will recede thanks to faster inoculations and plans to shut the unvaccinated out of most social activities. Photographer: Benjamin Girette/Bloomberg , Bloomberg

(Bloomberg) -- France’s government will lift its vaccine pass, which came into effect this week and prevents unvaccinated people from taking part in most social activities, once the number of hospital patients has fallen sufficiently to allow elective surgery to resume.

Even though the Omicron variant isn’t having as much of an impact on hospitals as prior strains, the occupation rate of beds remains high, French government spokesman Gabriel Attal told reporters after a cabinet meeting.

New cases totaled 501,635 on Tuesday, according to data from the public health office. While the total number of hospitalized patients continues to rise, hitting 30,189 on Tuesday, the number of patients in intensive care is lower than it was a week ago.

French leaders are betting that serious cases will remain manageable and that infections will start to recede, in part due to the vaccine pass.