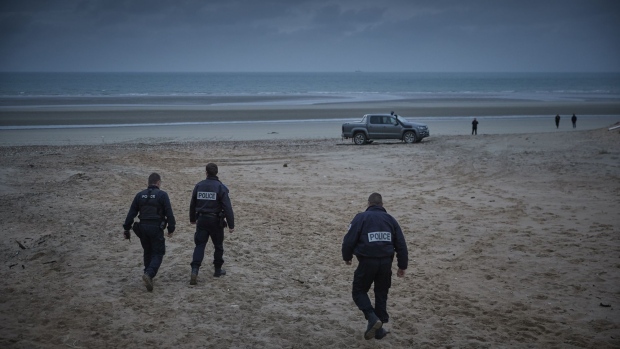 (Bloomberg) -- France is preparing to offer Boris Johnson proposals for an agreement with the European Union on migration, less than a week after Emmanuel Macron slammed the U.K. premier for not taking the issue seriously enough.

Prime Minister Jean Castex will write to Johnson on Tuesday to suggest they work on a pact with the EU after at least 27 people died crossing the channel to try and reach the U.K.

“We want a balanced deal offering real solutions including to the problems of France and Europe,” France’s interior minister Gerald Darmanin said on Monday after a defense cabinet meeting. “We don’t want a mere unilateral accord.” Spokespeople for Castex didn’t immediately return requests for comment.

In an exchange of barbs since the tragedy, British officials have said Macron wasn’t doing enough to stop the crossings and the French have countered that U.K. labor market acts as an incentive to try to reach the country.

A letter to Johnson from Castex could be a first step in a cooling of tempers.

On Friday, Darmanin scrapped planned discussions with his U.K. counterpart Priti Patel because Johnson had made the contents of a letter he wrote to Macron outlining a proposed returns agreement public in a series of tweets. Macron, meanwhile, said France wouldn’t work with the U.K. government until it “decided to be serious.”

The tensions add to a list of existing disputes on range of issues from defense to the granting of fishing licenses. Immigration is a particularly sensitive topic both in France, where it’s a main theme of campaigns for the April presidential election, and the U.K. because Johnson pitched tighter border controls as a benefit of Brexit.

France plans to double the number of staff patrolling the maritime border with the U.K. and beef up the fight against those who arrange the crossings, with the creation of seven new regional offices next year and a stronger legal arsenal, according to Darmanin.

He rejected Johnson’s proposal for France to take back migrants, and warned against British attempts to return them, saying that would contradict international law. France contends that the only solution to the crisis is an international one.

EU interior ministers are meeting on Dec. 9 to discuss the issue, and Darmanin said he would travel to Slovenia and Poland by then.

France and the U.K. are already bound by a host of bilateral accords, including the 2003 Touquet agreement which strengthens controls in both countries and implies the Franco-British border is in France.

As the April presidential election nears, pressure on Macron’s government is increasing from candidates who argue these agreements should be re-negotiated so that the U.K. takes on more responsibility in handling migrants. Even so, Darmanin said he wouldn’t question them.

In July, the U.K. agreed to pay 62.7 million euros to France to fight against human trafficking on French coasts in 2021-2022, but has since threatened to suspend the payments.