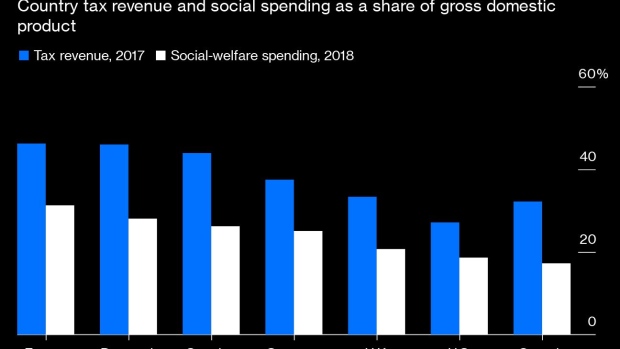 (Bloomberg Opinion) -- In recent years, several prominent economists have brought attention to the problem of growing inequality. These scholars include Thomas Piketty, author of the best-selling book “Capital in the Twenty-First Century,” and Emmanuel Saez and Gabriel Zucman, who in a new book chronicle the rise in American wealth inequality. All three embrace the same solution:  much higher taxes. Piketty has declared that billionaires should be taxed out of existence, and he called for a global wealth tax, while Saez and Zucman helped Democratic presidential candidate Elizabeth Warren design her proposal for a U.S. wealth tax. Piketty and Saez have also suggested taxing top incomes at a rate of more than 80%.

Other economists have struggled to evaluate dramatic proposals like this. Studies on the effects of taxation when rates are moderate might not be a good guide to what happens when rates are very high. Economic theories tend to make a host of simplifying assumptions that might break down under a very high-tax regime. Historical experience is of some help, because the U.S. had very high top income taxes in the 1950s, but economic conditions could be very different now.

One way to predict the possible effects of the taxes is to look at a country that tried something similar: France, where Piketty, Saez and Zucman all hail from.

During the past few decades, as income inequality rose in most rich countries, it stayed relatively constant in France. The biggest reason is government redistribution in the form of taxes and social-welfare spending. France leads its rich-country peers, including the legendarily egalitarian Scandinavian countries, on both measures:

France, therefore, shows that inequality, at least to some degree, is a choice. Taxes and spending really can make a big difference.

But there’s probably a limit to how much even France can do in this regard. The country has experimented with both wealth taxes and very high top income taxes, with disappointing results.

The wealth tax might have generated social solidarity, but as a practical matter it was a disappointment. The revenue it raised was rather paltry; only a few billion euros at its peak, or about 1% of France’s total revenue from all taxes. At least 10,000 wealthy people left the country to avoid paying the tax; most moved to neighboring Belgium, which has a large French-speaking population. When these individuals left, France lost not only their wealth tax revenue but their income taxes and other taxes as well. French economist Eric Pichet estimates that this ended up costing the French government almost twice as much revenue as the total yielded by the wealth tax. When President Emmanuel Macron ended the wealth tax in 2017, it was viewed mostly as a symbolic move.

Another French experiment was the so-called supertax, a 75% levy on incomes of more than 1 million euros. Introduced by socialist President François Hollande in 2012, the supertax added to the exodus of wealthy individuals, most notably actor Gerard Depardieu and Bernard Arnault, chairman of LVMH Moet Hennessy Louis Vuitton. Star soccer players threatened to go on strike, and there was fear that France would become a wasteland for entrepreneurs. Meanwhile, the supertax raised much less money than even the wealth tax had -- only 160 million euros in 2014. The unpopular tax was repealed two years after its adoption.

France’s experiments with taxing the wealthy at very high rates didn’t raise much money and didn’t prove politically sustainable. The flight of wealthy individuals from the country probably helped reduce inequality on paper, but it's not clear that their departure left France better off.

It’s possible that similar tax experiments in the U.S. might be more successful than in France. The U.S. economy is much larger than France’s; although a French business owner who moves to Belgium can still do business and move about freely within the European Union, an American mogul who moves to Canada might find access to one of the world’s largest markets restricted. That might allow the U.S. to raise more money from high taxes than France ever could.

But it’s also worth noting that France’s wealth tax and supertax ultimately weren’t that important. Despite repealing the supertax, France managed to increase government revenue and to reduce inequality. The end of the wealth tax will probably be a similar story. France simply didn’t need these flamboyant taxes on the rich to have very high levels of taxation and social spending. That means the U.S. probably doesn’t need them either. Tax increases across the board -- on top incomes, capital gains, estates, pass-through businesses, corporations, and so on -- might not excite populist firebrands, but they’re probably a more effective strategy for fighting inequality.