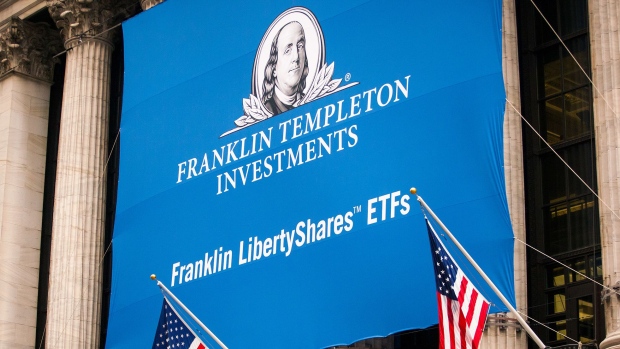 (Bloomberg) -- Franklin Resources Inc. destroyed a blockchain startup to get its technology and a “short cut” into the booming fintech market, a group of investors claimed in a lawsuit.

The startup, Onsa, claims to have developed a “tokenized” money market that converts assets into digital tokens -- the first of its kind to be approved by the Securities and Exchange Commission. But after taking control of Onsa through an investment, Franklin abruptly axed top executives and coders at the startup in 2020 and recruited some of them to start its own version of the blockchain technology, according to the lawsuit.

“Franklin Templeton is now on the cusp of launching the technology it took from Onsa under the Franklin Templeton banner, hoping to change its image as a technological dinosaur and to generate enormous financial benefits that flow from Onsa’s innovative technology,” the group of Onsa shareholders called Blockchain Innovation LLC said in the complaint.

The group claims Franklin, which manages $1.5 trillion in assets, wrecked a business that was comparable to blockchain companies which have recently gone public and achieved billion-dollar market valuations. The shareholders are seeking damages “likely in the billions of dollars” and a court order prohibiting Franklin from rolling out its tokenized market fund or its “Benji” mobile application or web platform.

A Franklin spokeswoman called the lawsuit “misguided.” She said it’s the first time Franklin has heard of Blockchain Innovation LLC, “which appears to be an entity that exists solely to manufacture litigation against Franklin Templeton.”

If the group had done any “reasonable dilligence,” it would have shown the complaint lacks merit, the spokeswoman said.

Jennifer Johnson, who took over as Franklin’s chief executive in 2019, said that year that she would use Franklin’s more than $8 billion cash for technology investments and acquisitions to boost growth. In June, Johnson said blockchain is still “underappreciated” and a major disruption force.

Franklin is accused in the lawsuit of breaching its fiduciary duty. Franklin obtained control of Onsa through an investment, and despite assuring the startup that it would remain an independent company, it misappropriated Onsa’s technology and liquidated the company’s assets in a “pseudo-bankruptcy proceeding” that was designed to insulate the money manager from liability to non-Franklin shareholders, the Onsa shareholders said in the complaint.