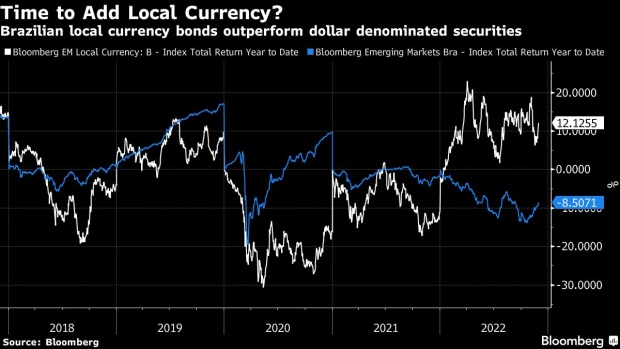 “There are big opportunities there, but it’s just really sort of getting an idea, getting comfortable with the economic direction that we’d like it to head at in Brazil,” said Nicholas Hardingham, a London-based emerging-market debt portfolio manager at Franklin Templeton. “It’s definitely an opportunity, something that we’re looking at but we can’t quite sort of get comfortable yet.”

Brazil’s incoming government kicked off a congressional approval process to spend the equivalent of 175 billion reais ($33.8 billion) per year above the fiscal cap during a four-year span that could end up being reduced to one or two years. That’s while Fernando Haddad, who is seen as a leading candidate to helm the country’s economy, said that fiscal sustainability and social expenditures will be compatible in the incoming administration.

The Bloomberg EM Local Currency Brazil Total Return Index in dollars is at 12.12% year-to-date compared to minus 8.5% for a gauge grouping US dollar-denominated bonds issued by Brazilian borrowers. Positive performance expectations in the local market may continue as the country’s central bank may run ahead of most peers in the monetary policy cycle.

Brazil’s Central Bank, which started raising rates around one year earlier than the Federal Reserve in a bid cool inflation and protect the currency, is now expected to ease its monetary policy in the first half of 2023, according to the consensus of analysts compiled by Bloomberg.

Even as bond yields may look attractive, government policies could derail investor gains. In fact, Brazil’s real -- which has been outperforming most of this year -- was the sole decliner among major currencies in November. Also, rate swap traders are diverging from economists’ expectations and see chances for further tightening and Goldman Sachs Group Inc. strategists led by Caesar Maasry said that potential fiscal spending could pressures inflation dynamics, which in turn may lead to higher interest rates.

“Typically we’d be more on the hard currency side and I think that would likely continue, but it might be that we sort of start taking a little bit more local currency exposure,” said Hardingham, referring to Franklin Templeton’s overall approach to emerging markets debt. His team is also researching the Peruvian local currency market, he said.

The new Brazilian president will be sworn in on Jan. 1.

--With assistance from Simone Iglesias, Oscar Medina and Vinícius Andrade.