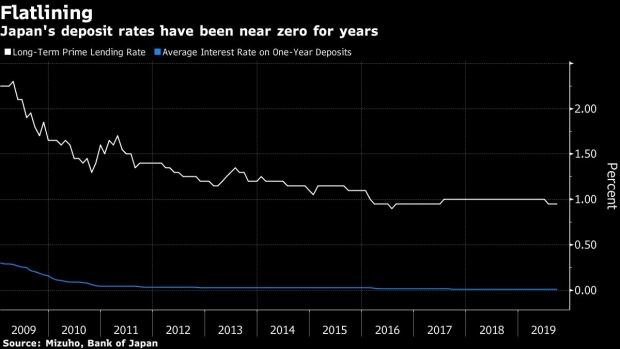 (Bloomberg) -- Japan’s long-suffering savers have put up with virtually zero interest for years, but at least their bank accounts have remained free. That may change as speculation for further monetary stimulus mounts.

Lenders could begin imposing maintenance fees for retail deposit account holders if the Bank of Japan deepens negative interest rates from minus 0.1%, according to JPMorgan Chase & Co. analyst Rie Nishihara. A central bank board member also warned last month that banks may have to consider such a change.

While such fees are commonly charged in markets such as the U.S., Japanese banks have long felt obliged to avoid punishing people for parking their money in accounts. “So far it’s taboo, but if a further rate cut happens, I expect at least a discussion of charging deposit account fees to happen,” Nishihara said.

Since negative rates were introduced in 2016, Japanese bank shares have languished as their lending profitability dwindles. Nishihara estimates another rate reduction could wipe out as much as 500 billion yen ($4.6 billion) of bank profits, though lenders could make up 300 billion yen if they charge 1,000 yen per account annually.

Other banks around the world have also been grappling with the topsy-turvy world of negative rates, with some in Europe already taking the more drastic step of passing them on to depositors directly. In Japan, even central bank officials -- who meet next week -- have signaled that something has got to give.

“If lending rates decline further, financial institutions that are no longer able to withstand increased downward pressure on their profits may start to charge fees and commissions on deposits, thereby making deposit rates virtually negative,” Bank of Japan board member Hitoshi Suzuki said in a speech in August.

A few banks in Japan charge depositors for keeping inactive accounts or those with small balances, but the practice is rare.

Such levies could help to address Japan’s unusually high number of accounts, easing costs for banks, then-central bank Deputy Governor Hiroshi Nakaso said in 2017. There are about seven accounts per adult in Japan, the most in the world, according to International Monetary Fund figures.

Banks have resisted imposing account maintenance fees for two main reasons, according to Nakaso. One is the historic competition for deposits that emerged after World War II, and another is the culture of providing accounts as a service, he said.

“Probably, the social norm in Japan is something along the lines of ‘there is no way that fees are charged on hard-earned money deposited in a bank,’” Nakaso said in a speech. “But I think the time has come for the Japanese people to discuss fair compensation for financial intermediation services.”

Account fees could become a stable revenue source for banks, which need to invest in areas such as digital banking to remain competitive, said Hiroshi Oka, a senior fellow at Fujitsu Research Institute. “Banks can use the fees to create new services,” he said.

To contact the reporter on this story: Taiga Uranaka in Tokyo at turanaka@bloomberg.net