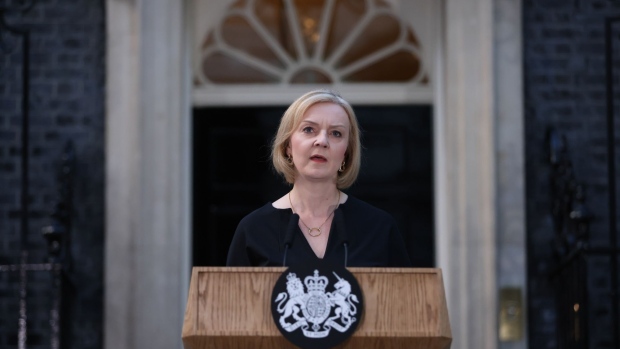 Liz Truss, UK prime minister, makes a statement following the death of Queen Elizabeth II outside 10 Downing Street in London, UK, on Thursday, Sept. 8, 2022. Queen Elizabeth II, whose reign took Britain from the age of steam to the era of the smartphone, and who oversaw the largely peaceful breakup of an empire that once spanned the globe, has died. , Bloomberg

(Bloomberg) -- Former UK Prime Minister Boris Johnson was only half-way through rolling out several key policies when his government collapsed with a mass resignation. His successor Liz Truss now looks set to dilute a string of overdue decisions on technology and media.

One of Truss’s biggest inspirations is Margaret Thatcher, who deregulated finance and privatized public assets in the 1980s. With the Truss government planning to announce various new policies over the coming weeks, including a multi-billion pound giveaway in Friday’s mini-budget, here are some possible changes for the sectors.

Before Johnson’s resignation, the UK’s Online Safety Bill was close to being implemented. It’s a sweeping law to make British sites safer, imposing new rules which could affect as many as 25,000 businesses according to government estimates. However on Tuesday new Culture Secretary Michelle Donelan said that she plans to “edit” provisions that would have regulated “legal but harmful” posts, in a move that would please free speech campaigners.

A wide-ranging review of Britain’s successful betting sector was pledged in the Conservatives’ 2019 manifesto and has been delayed several times. Former gambling minister Chris Philp had sent it to Prime Minister Johnson for final approval, and in his resignation letter in July urged him to push through tough reforms.

But the decision has been left to Truss’s government. A mandatory levy on betting companies to raise money for mitigating harm was unpopular at the Treasury, according to a person familiar with the discussions. Stake limits for online betting were also under consideration.

A representative for the Treasury didn’t immediately respond to a request for comment.

As part of a shake-up in broadcasting rules, Johnson’s Culture Secretary Nadine Dorries wanted to sell Channel Four Television Corp, the state-owned advertising-funded station. Truss has expressed a preference for privatization too, but the policy is controversial and it may slip down the agenda as the country grapples with a cost of living crisis. On Tuesday, Donelan said that policy was being re-examined.

In the same industry, a planned ban on advertising for food and drink high in fat, sugar and salt could be scrapped, according to a person familiar with the matter.

The government is due to publish a semiconductor strategy in the coming weeks. That may not face major changes, but officials are leaning toward unwinding or imposing restrictions on the Chinese-backed takeover of the UK’s biggest semiconductor component factory, Newport Wafer Fab, Bloomberg reported earlier this month.

China hawk Tom Tugendhat is now security minister, which means businesses with links to Beijing may face tougher rules under this government. During her leadership campaign, Truss herself also said Britain should crack down on Chinese firms, possibly including social media giant TikTok.

Johnson previously banned Huawei from the UK’s 5G networks, but only after he’d previously given it the green light. He’s also spoken about not wanting to scare away Chinese investment.

The last government was expected to give powers to a new tech regulation unit inside its antitrust watchdog, the Competition and Markets Authority. However, the legislation needed to introduce those powers was delayed indefinitely, and time is running out in the Parliamentary calendar before the next general election.

Alongside other potential policies including an Online Sales Tax, a review of online advertising, and a push to woo tech companies like Arm Holdings Ltd. to list in the UK, Truss’s team have their work cut out for them.