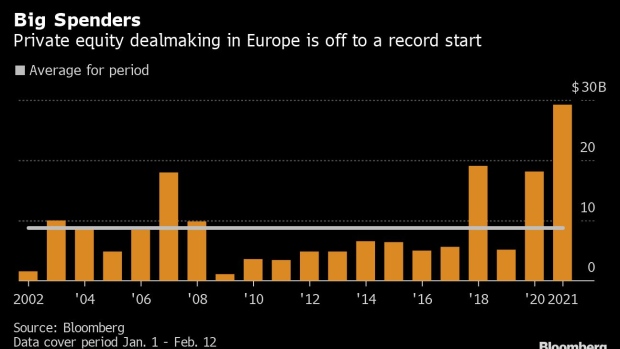 (Bloomberg) -- A year of pandemic prudence is giving way to jumbo dealmaking in Europe for deep-pocketed private equity houses.

Buyout firms have announced $29 billion of takeovers involving European companies this year, up 60% year-on-year and the most for this period on record, according to data compiled by Bloomberg.

That’s after months in which many large buyers, including Blackstone Group Inc. and CVC Capital Partners, stayed on the sidelines or focused on funneling much-needed capital to their existing portfolio companies.

Now, opportunities stemming from the coronavirus crisis, an abundance of cheap credit and willing sellers looking to clean up their balance sheets are creating ripe conditions for bigger deals. Soaring equity markets, meanwhile, are driving up prices.

“It‘s hard to overstate it,” said Anthony Diamandakis, co-head of global asset managers at Citigroup Inc. “Chances are high that we will see jumbo deployment this year.”

The industry has long had the luxury of holding a record amount of unspent capital, and with the time to pick its bets. Investors continued to pour money into buyout funds last year, even as private equity firms stayed penny wise.

“A number of sponsors have been sitting on the sidelines for a little while,” said Michael Abraham, head of financial sponsors for Europe, the Middle East and Africa at UBS Group AG. “You can only do that for so long. Private equity has a mandate to invest.”

The Signature deal means Blackstone, the world’s biggest private equity firm, already has $9.1 billion worth of deals to its name in Europe this year, more than it announced from April to December 2020, Bloomberg data show. On a January earnings call, Chief Operating Officer Jonathan Gray said Blackstone expected more activity around Covid-impacted sectors including travel and hotels.

“The pandemic will put more pressure on sponsors to deploy more capital within less time,” said Phillip McCreanor, head of U.K. and the Nordics at investment bank Lincoln International LLC.

Buddying up could become a template for firms in the race to win out on competitive deals this year, according to Diamandakis at Citigroup.

“We might even see a situation where two or three sponsors team up with an equity contribution of $3 to $5 billion each, plus co-investment,” he said.

Buyout firms are even starting to trump strategic buyers, which have traditionally been able to offer more because they can find synergies with the targets. In the hotly-contested race for Lonza Group AG’s specialty ingredients unit, Bain Capital and Cinven were able to beat bidders including chemical producers Lanxess AG and Petronas to seal a 4.2 billion-franc ($4.7 billion) deal.

Elsewhere in Europe, Ardian SAS and GIP could bid 11.3 billion euros ($13.7 billion) for French water utility Suez SA, which is trying to fend off a takeover attempt by arch rival Veolia Environnement SA.

Yield-hungry investors have yet to sate their appetite for private equity funds. The amount of unspent cash sitting in Europe-focused buyout vehicles stands at $234 billion, according to data provider Preqin, and there are no shortage of targets for the money to chase.

Buyout firms have been pursuing iconic German sandal maker Birkenstock, Unilever’s tea business and assets being sold by French utility Engie SA. And in what could be one of the year’s landmark transactions, EQT AB has approached the $15 billion Dutch company Royal KPN NV about its biggest ever takeover, Bloomberg News has reported.

“It’s safe to assume that M&A activity led by private equity will continue to be robust this year,” Anthony Gutman, co-head of investment banking in Europe, the Middle East and Africa at Goldman Sachs Group Inc., said in an interview last month. “A combination of low interest rates, high amounts of capital and areas of dislocation in listed equity markets is conducive to heightened activity.”