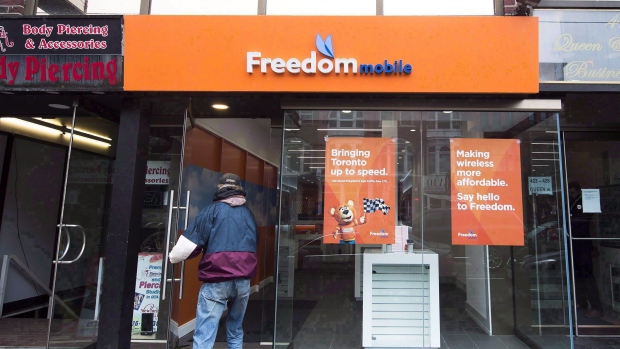 TORONTO -- Freedom Mobile is using a limited-time offer of free phones to fight back against a recent change in pricing strategy by Canada's three national wireless carriers.

Customers who buy one of a selection of two-year service contracts from Freedom will also get to choose a no-cost Apple, Samsung or LG smartphone from a list of about half-a-dozen models.

The Calgary-based regional carrier says its Absolute Zero promotion sets it apart from device financing plans recently introduced by its national rivals because customers pay only for the service and at no point for the phone.

Recently introduced financing plans from two of Canada's Big Three wireless companies allow customers to buy and pay for any available phone over 24 or 36 months, but with no upfront fee or interest on the device portion of the purchase.

The new financing plans that separate the cost of hardware from the cost of service are a major shift from a long-standing practice of including the carrier's cost of subsidizing devices within one- or two-year service contracts.

The arrival of a 36-month device financing plan from Rogers also caused a stir after allegations that it might violate a regulatory prohibition against charging a fee for ending a service contract after two years.

The Canadian Radio-television and Telecommunications Commission has begun collecting information from all the carriers through a letter asking more than a dozen questions that the regulator wants answered by July 30.

The new device financing plans come as Rogers, Telus and Bell begin to offer their first service plans that charge a fixed monthly fee (and no overage charges) for an unlimited amount of data -- a pricing strategy already used by Freedom.

The national carriers have said their adoption of unlimited wireless data is in preparation for the arrival of faster fifth-generation services that will carry vastly more data.

However, Freedom -- a much smaller and newer carrier with a base in Ontario, Alberta and British Columbia -- has claimed its rivals were following its lead to use slower data transfer rates, rather than overage fees, when usage is too high.

Freedom says its current Absolute Zero promotion is also game changer, even though the promise of a phone for zero dollars has been a long-time, widely used feature in Canada's wireless sales promotions.

"The rules we are re-writing are the ones that has seen our competitors offer their customers handsets they claim are 'free' but that come with a catch -- either through an additional monthly charge or other hidden fees," said Chethan Lakshman, Freedom's vice-president of external affairs.

Freedom's main condition for getting one of two eligible Apple smartphone models, one of four Samsung models or an LG G8 ThinQ is to sign a new contract for a two-year Big Gig Unlimited plan during the promotion.

"We have no information to share at this time regarding end date. Absolute $0 is available for a limited time only," Lakshman said.

Such limited-time promotions are a mainstay of the industry's marketing, as carriers compete to sign subscribers during the busy back-to-school period and the seasonal gift-buying period before Christmas.

In the case of Freedom, its current back-to-school promotion has six possible automatic billing plans -- ranging in price from $50 per month to as much as $115 per month --with variations in what level of talk, text and data is offered.

At $75 per month, Freedom was offering a Big Gig plan with a total of 18 gigabytes of full-speed data, although only 2GB is part of Freedom Nationwide agreements with other carriers and the rest is within Freedom's own coverage areas.

Although Freedom's rivals weren't displaying $50, $60 or $70 per month unlimited data offers for their flagship plans, they all have the advantage of bigger national wireless networks as well as flanker brands with various pricing options.

Websites for the Rogers and Telus brands were showing Friday no-overage monthly plans with 10 GB of full-speed data at $75 per month, while the lowest listed price for a 10 GB Bell-branded unlimited plan was $85 per month.