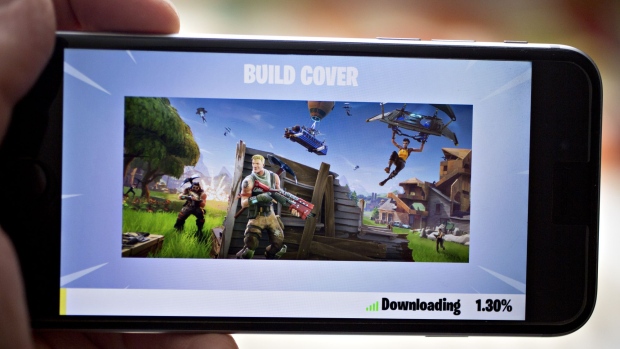 The Epic Games Inc. Fortnite: Battle Royale video game is displayed for a photograph on an Apple Inc. iPhone in Washington, D.C., U.S., on Thursday, May 10, 2018. Fortnite, the hit game that's denting the stock prices of video-game makers after signing up 45 million players, didn't really take off until it became free and a free-for-all. Photographer: Andrew Harrer/Bloomberg , Bloomberg

(Bloomberg) -- Fans of Fortnite aren’t happy that Apple Inc. pulled the game app off the iPhone last year -- and some aren’t shy about appealing to the federal judge who has the power to make things right.

“Can we please have Fortnite mobile back?” a voice was heard saying Tuesday as a clerk was testing dial-in access for the public to monitor Epic Games Inc.’s trial against Apple in federal court in Oakland, California.

Yesterday, as the three-week trial opened, there were enough hecklers who’d figured out how to unmute themselves -- against the court’s rules -- that the phone system was briefly shut down, prompting some online commentators to refer to the situation as a hijacking.

On Tuesday morning, the number of listeners dialed into the court’s audio feed was about a third of the almost 500 who were on the line a day earlier, but there were also unofficial streaming options on YouTube for others to follow the proceedings. A spokesman for the court didn’t immediately respond to a request for comment.